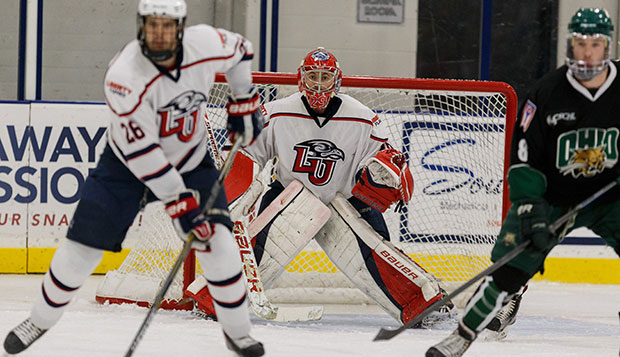 Liberty junior goalie Matt Pinel was one of four players on the Flames' Division I squad to earn Academic All-America accolades, along with graduate defenseman Peter Shantz (26).

Five members of Liberty University's ACHA Division II men's hockey team and four student-athletes on the Flames' DI men's squad have earned ACHA Academic All-American status this season. The distinction is awarded to juniors, seniors, and graduate students who have maintained a cumulative grade-point average of 3.2 GPA or higher.

"The academic support we have here in Club Sports has been instrumental to the success of our student-athletes," said Kirk Handy, head coach of the DI men's hockey team and athletic director for Club Sports. "That's a huge thing we want to focus on."

"It is obviously an honor," said Kerr, a former DI player who works as recruiting coordinator for Liberty's Club Sports department and will graduate with a Master of Business Administration (M.B.A.) in May. "Balancing school and working for Club Sports as well as playing hockey was definitely challenging."

"Those guys are diligent about applying themselves in every area of their lives and you can see it come to fruition in their academics and the way they compete on the ice," Liberty Associate Head Coach Jeff Boettger said. "It's awesome to see them being recognized from an academic perspective. Academically and socially, they manage their time well and are committed people, which shows the character and the focus they have."