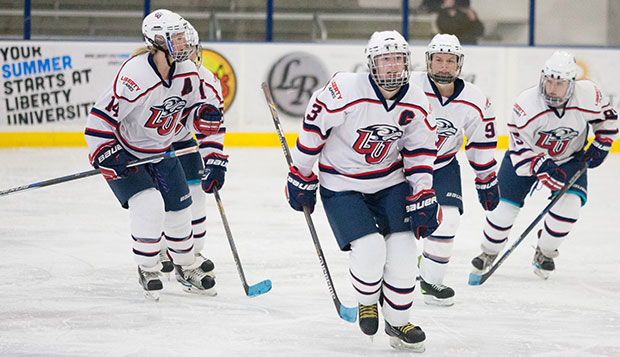 Liberty's top offensive line of Catharine Burrell (14), Carrie Jickling (3), and Courtney Gilmour (92) will be complemented by the addition of seven to nine more forwards next fall.

Since Liberty University's ACHA Division I women's hockey team captured its first national championship last winter, and the LaHaye Ice Center underwent a major renovation over the summer, Head Coach Paul Bloomfield has noticed a dramatic increase in the number of prospective student-athletes interested in joining the Lady Flames.

Even before this month's ACHA DI National Championships ended with a semifinal loss to eventual champion Miami of Ohio in a rematch of last year's final, Bloomfield had a list of 12 recruited players committed to the program for next fall.

"That's the biggest class I've ever had and every one of them brings something that's unique," said Bloomfield, who started last season with a 14-player roster before adding two players for the spring semester. "It gives us more depth if we get injuries or someone's having an off day. Our schedule's going to be a lot heavier next year than this past year."

As many as 14 players are expected to return — all but graduate forward Nikki McCombe and senior defenseman Madison Fischer — so next year's squad could have as many players as the DI men's team.

"I'm really excited and looking forward to the talent coming in," Bloomfield said. "We should have good chemistry for next year. Our top line (forwards Carrie Jickling, Catharine Burrell, and Courtney Gilmour) is coming back as a unit, though I'm not guaranteeing that they would stay together. We'll just have to see the talent level that we get in. The ones who put in the effort, and work the hardest, will be the ones who play. Hopefully, the level of commitment will stay high."

Seven committed recruits, including two who will enroll in Fall 2017, are planning to attend this weekend's College For A Weekend (CFAW), when Bloomfield will hold a practice Thursday night and a scrimmage Saturday. Two others had planned to visit, but their respective teams are still competing in Canada's provincial playoffs.

Tryouts for all returning and recruited players will be held in August, but the 12 incoming freshmen are all but guaranteed roster spots on the DI team.

"We tried something a little different this year, having players sign letters of intent, which is good because it not only gives us an affirmative, but it gives them an affirmative in their mind," Bloomfield said. "If they get a letter, they've basically made the team next year."

That approach will change next year, when he plans to organize tryouts for prospective players over the April CFAW weekend.