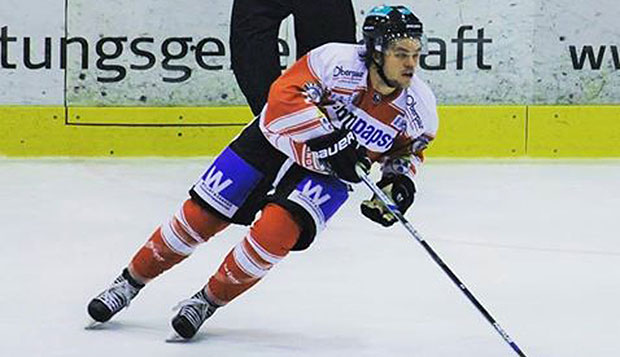 Former Liberty University ACHA Division I men's hockey defenseman Jackson Kuhn recently signed a two-year contract extension with the EV Landshut Cannibals, the third professional team he played with in Germany this past season after spending the previous year in Finland.

He overcame an early-season injury to emerge as one of the Cannibals' top four defensemen, a role similar to that he played at Liberty from 2011-2015 and in Finland last season.

"This year was a rollercoaster," Kuhn said. "A new coach and new management all came into play around the time I was coming back from my injury, around 10-15 games into the season."

His return to the lineup coincided with Landshut's late-season resurgence, when the Cannibals finished on a 12-3-3 run to secure a first-round playoff bye as the fourth seed out of the Northern Conference.

"I put a ton of work in over my injury time to get into great shape and it paid dividends in the latter part of the season," Kuhn said. "After the season's midpoint, I started to really pick up my game and was competing at the highest level I had ever been able to reach."

Kuhn gradually became a fan favorite and impressed coaches and teammates with his leadership ability on the ice.

"My numbers were solid, and I was starting to look like myself — reading plays, being aggressive, and doing everything with heart," Kuhn said. "It was becoming clear that the fans were on board with me and that the management was also pleased with my effort."

He contributed three points, nine blocks, and 17 hits in seven playoff games as Landshut won all three games against Selb in the best-of-five second round before being eliminated by Tillburg — The Netherlands' National Team — three games to one.

"I was trying to be the best player on the ice, an impact player, and by the end I think it was very clear that I was willing to do whatever it took to win," Kuhn said.

A native of Ontario, Canada, whose father's side of the family is of German descent, Kuhn and his wife, Dawn, have acclimated well to Landshut, a city of 80,000 located 40 minutes from Munich.

"Dawn and I have truly come to love Landshut, which has everything you need," Kuhn said. "It couldn't happen without God, and we know that He is the reason we are here. He made it clear that Landshut is the place He wanted us."