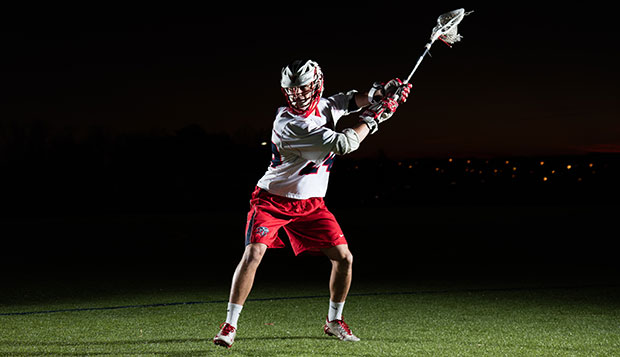 Liberty senior midfielder Brett Bernardo gears up for this Friday's late-night atmosphere during a preseason workout.

The Flames were the first Club Sport team to start the "Midnight Mayhem" craze four years ago, with the men's volleyball and ACHA Division I men's hockey teams following the trend over the past two years. For on-campus students, it is a late-night approved event and they can pick up their late-night pass at the conclusion of the game.

It will be the first meeting between the 16th-ranked Flames (5-3) and the unranked Gators (6-3) since Liberty won 9-7 on its last spring break trip to Florida in 2014, its first season competing at the MCLA Division I level.

"To be in an environment where there's a lot of fans, a big crowd, just an intense game, hopefully it will be a good one for the fans to see," said senior attack Ryan Miller, the Flames' leading scorer with 20 goals and 28 assists.

"We all feed off of the crowd and feed off of each other," Liberty senior midfielder Bryce Mrakovich added. "We all get hyped on the sidelines or on the field. It definitely gets our intensity up."

The Flames will look to extend their 21-game home winning streak, which stretches back to April 10, 2012, but Liberty Head Coach Kyle McQuillan knows the late-night atmosphere often fires up visiting teams as much as it does his own.

"We usually get a team's best punch in an event like this," McQuillan said. "Florida's got a talented young team, including a freshman attackman, Chris Chiogioji (14 goals, 14 assists), who's done a great job. In terms of competition within the SELC (Southeast Region), they have done really well (with wins over Miami, Central Florida, and South Florida). They're going to be in the (SELC) playoffs, so they've got something to play for."

Both teams are in similar situations within their respective regions, with Liberty also able to clinch a top-two finish in the Northwest Region and SELC Tournament berth with a win at Tennessee on April 9. That would set up a showdown with Virginia Tech for the regular-season title, April 15 at home, the same night Florida will travel to Florida State to decide the Southeast Region regular-season champion.

Liberty's only loss on its spring break road trip was to FSU, in a 17-16 shootout.

McQuillan wants to instill a sense of urgency into his team as the season approaches its final stretch, especially as it prepares for the SELC Championships, with a national tournament bid at stake.

"All of these games are important, must wins," he said. "In our mind, we have to have a playoff mentality from here on out. If we finish the season as we want to, it will have a positive effect on the rankings, but we do not have much of a shot of making nationals without winning the SELC Championship. That's our first and primary goal this year."

Last year, the SELC sent two teams to the MCLA National Championships in Orange County, Calif., where this year's tournament will again be played from May 9-14. Georgia Tech, ranked second in this week's MCLA poll, is almost guaranteed a spot in the 16-team national tournament field, even if it doesn't win the April 22-24 SELC Championship in nearby Johns Creek, Ga.

"I'd love to see a time when the SELC could get three teams in, as the (Southwestern Lacrosse Conference) did last year," McQuillan said. "It's not always going to be the top 16-ranked teams because nine of the 10 conference champions get an automatic bid. The last two years, we've been right on the bubble there. We try, as a coaching staff, to put all the focus on winning an SELC championship because that way you don't have to worry about the rankings — you've punched your ticket to nationals."