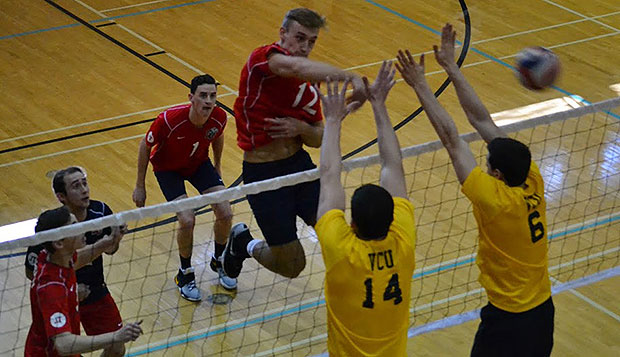 In the DI bracket, the top-seeded Hokies, who swept Liberty in the season-opening match played at the Vines Center, eliminated the Flames in the semifinal round. But Liberty still placed in the top four out of 10 teams in the tournament and got the last available berth to its regional tournament after Virginia Tech, James Madison University, and Florida had clinched the first three.

"We were strong in the middle, with Josiah Hershberger and Luke Werth getting their hands on a lot of hits and putting balls away," Flames Head Coach Bryan Rigg said. "Throughout the day, Josiah Williams was passing and service receiving well and opposite hitter Sam Eisbrenner had a great day. He had a tough time going against Virginia Tech with its two big blockers, but for the rest of the day, he got a lot of kills."

"We have yet to win a game against Virginia Tech (this spring season)," Rigg said. "It was competitive in the second game. They're ranked No. 2 in the country right now and I think they should be ranked No. 1. The only way of beating them is by keeping them off balance, showing them things they're not expecting. Not only do you have to play your best game, but they have to be off a little bit."

The Flames have experimented with new lineups over the past two months with sophomore setter Alex Lower running the 5-1 offense and Rigg using a three-man rotation at outside hitter with freshman Josh Talamoa complemented by Scott Zalizniak and Eugenio DeJesus, who both came up from the DII squad.

At the East Coast Championships, Liberty will be in the same pool as Virginia Tech, West Virginia, and Army in a 12-team tournament with four representatives from the North, South, and Central.

Rigg was at least as pleased about the Flames' DII squad going 6-0 with victories over William & Mary, Christopher Newport, Radford, Longwood, and JMU's and Virginia Tech's B teams to clinch the No. 1 seed for the East Coast Championships, where they will be in the same pool as Oswego N.Y. and UMBC.

"The whole team did really well," Rigg said. "Kaden Knepper, a freshman setter originally on the DI team, and Sam Wyman, a sophomore setter, had really good passes that fueled our transition offense. Their setting was terrific and all the hitters really got involved and had equally distributed kills — Tim Jacobsen and T.J. Forsythe on the outside and Jacob Holbert and John Davenport in the middle."

In the final, the Flames avenged a three-game setback to the Hokies at a play date in February.