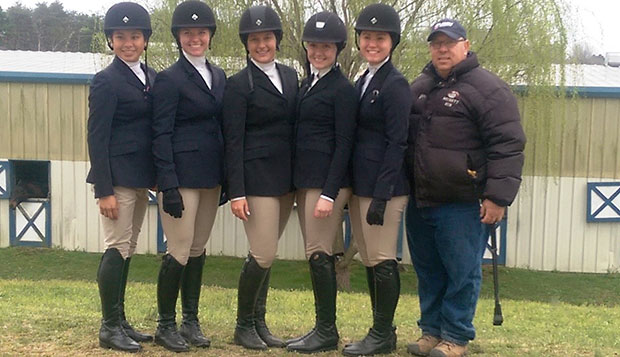 Two members of the Western team competed in the Intercollegiate Horse Show Association (IHSA) Southern National Semifinals in Murfreesboro, Tenn., while the Hunter Seat team concluded its regular season Saturday in Providence, N.C., home of Averett University's equestrian facility, before five of its women's riders who had qualified stayed to compete in Sunday's Regional Finals.

In Tennessee, Flames senior team captain Micah Armbrust rode through the preliminary round and advanced to the championship round of the Western semifinals before finishing fourth, with the top three riders qualifying for the May 6-8 IHSA National Championships in Lexington, Ky.

Sophomore Avonlea Kisner, who also qualified for the Southern Semis in the advanced division, rode well but allowed her horse to break out of its canter, an error severe enough to keep her from advancing to the finals. Liberty's Western team placed third in its region, behind St. Andrews and NC State.

Liberty's Hunter Seat team was only permitted to have nine of its riders compete in Saturday's regular-season-ending show. After a slow start, the Lady Flames finished strong with blue ribbons from freshmen Michal White and Zoe Leppke, earning her the points she needed to compete in Sunday's Regional Finals, and a second-place showing from sophomore Leah Wright.

Leppke and Wright rode exceptionally well in Sunday's preliminary rounds of regionals and both reached the championship round. Wright was eventually eliminated, but Leppke stayed in the ring with the final group, finishing fifth overall in the Walk Trot Canter class.

Junior Liz Chenelle excelled in the Intermediate Flat class but had a bad break that prevented her from advancing to the Zone competition, finishing third overall with the top two riders qualifying. Senior Brittany Kimmel and junior Cassie Steptoe also rode for Liberty, but failed to advance.

"It is disappointing to not advance to the next stage," Head Coach Jim Arrigon said, "but looking at the bigger picture, I'm really proud of this group. As each rider came out of the ring this weekend, I could tell them this was their best ride of the year. We have to be happy with that."

Riders will spend this week trail riding before getting back to work training and planning for next season.  "We have some good freshman recruits lined up for next year who will really help our team," Arrigon said. "I've also heard from a couple current Liberty students who want to try out for the team next year."