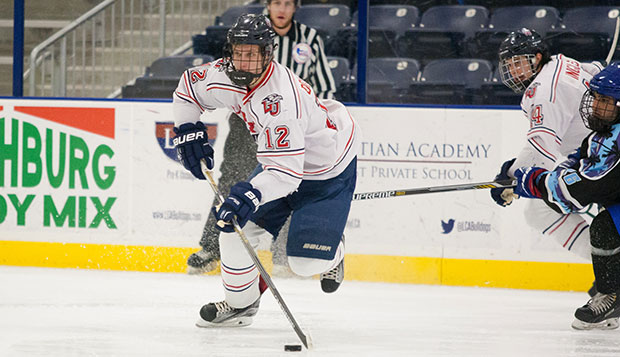 Flames forward Devon Docksteader netted his 35th goal of the season and 11th game-winner just 2:01 into the extra period to beat Miami of Ohio, 2-1, in Monday's ACHA DII semifinals.

This time, facing Miami of Ohio in a rematch of the 2014 Southeast Region final, Docksteader won the puck from RedHawks defenseman Mike Frenzel in the back left corner before skating behind the cage and pivoting in front of defenseman Mike Rispoli. He deftly tucked a backhander from near the right post through the five-hole of Miami goalie Taylor Ley for his 35th goal of the season and 11th game-winner.

The goal, which came a minute after Miami had killed off a penalty to start overtime, ignited a Flames celebration behind the net. Up to that point, the game was a showdown between Ley and Liberty freshman goalie Blake Scott, who made 53 saves as the RedHawks held a 54-35 shot advantage.

"We were being outshot all game," Scott said. "As soon as they got going, they didn't let up off the gas pedal and they kept coming. It's a whole new game when it gets to overtime. I was hoping we would capitalize on the power play, but we got it a little later and that's all that matters."

The Flames struck first in the rematch — just over a minute into the third period and seconds after Ley saved a wraparound attempt by Docksteader — when senior forward Eric Burke sent a backhanded assist across the crease and sophomore forward Sean Bakker one-timed it past Ley.

It looked like the game would end in a shutout before Miami forward Matt Walsh stole a pass in the high slot and fed a pass to forward Rob Norton, who put away a sharp-angled shot from the left endline.

Both teams were coming off 5-4 overtime victories in the third round of pool play that sent them to the semifinals — Liberty over William Paterson and Miami over Boston. Ley had posted the only shutout of the tournament with a 2-0 upset of Lindenwood-Belleville, the No. 1 seed in the RedHawks' pool.

Liberty and Miami finished first and third, respectively in the final Southeast Region regional rankings. In the teams' only previous meeting Feb. 23, 2014, at the LaHaye Ice Center, the Flames rallied for three goals in the final 10 minutes to notch a 4-2 victory that sent them to their first ACHA DII National Championships in eight seasons.

Liberty (30-3) advances to Tuesday's championship game at noon against Florida Gulf Coast University, a 5-2 winner over Grand Valley State in Monday's first semifinal. The Eagles, who finished the regular season ranked second in the Southeast, lead the tournament with a 20-goal differential on their opponents. This will be their third consecutive ACHA DII championship game and fourth in the past five seasons. The Flames will be looking to claim their first-ever men's championship after winning three of four regular-season contests with FGCU, including a sweep of the Eagles in their last two games of the year at LaHaye.

"They're in the Southeast region so they're our rivals and we're ready to go," Scott said.

This is Liberty's third consecutive trip to nationals and first Final Four showing since 2006, when it lost to Oakland (Mich.) in overtime in the final a year before both teams moved up to the DI level.