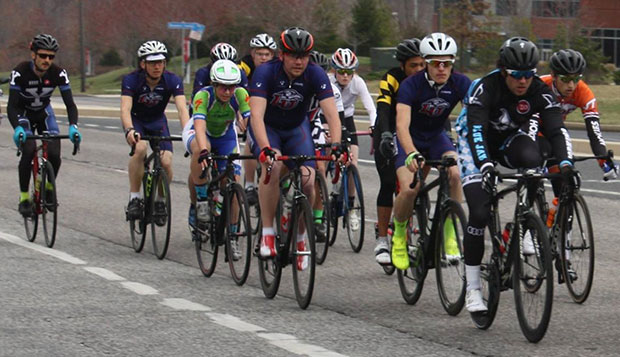 Joseph Anderson (third from right) and Brandon Siller are among the lead cyclists early in a road race in Maryland on March 12.

Wet and wintry conditions challenged Liberty University's men's cyclists to complete Saturday's Virginia Tech Cycling Classic road races, but many of those who endured were rewarded with top-10 finishes.

"It was definitely not just a physical, but a mental race with how miserable the weather conditions were there," Flames Head Coach Parker Spencer said, noting that the majority of the race fields didn't finish their races. "Saturday was pretty brutal. It rained the whole time and, higher up in the mountains, the rained turned into sleet. It was slick, but not overly dangerous. It wasn't an easy weekend for anybody out there. I was proud of our guys for breaking through those conditions."

Sophomore Jake King placed third in the 60-mile Men's Collegiate A race, out of eight finishers in a field that started with 20 riders.

"He barely missed a breakaway that kept him from being up with the guys that finished first and second," Spencer said. "There was a crash in the A race, and some people went to the hospital, but Jake wasn't caught up in that. It was a very challenging course, which plays to a lot of our guys' advantage with how much practice they get on the hills. But the weather broke everything up and made it hard to stay in a big pack."

Out of 32 cyclists that started In the Men's Collegiate C race, Liberty had four riders place in the top 10, led by graduate Joseph Anderson (third) and senior Christian Schick (fifth).

Liberty's only entrant in the 47-mile Men's Collegiate B race was freshman Ethan Krohn, who was one of 20 riders to pull out from a race that featured fewer than 10 finishers.

"The problem was their hands got so cold that they couldn't break or shift anymore," Spencer said.

Riding conditions were more favorable for Sunday's criterium in downtown Blacksburg, Va., where Krohn placed eighth out of 15 finishers in the 45-minute B race and Schick and Anderson took fifth and sixth, respectively, in the 30-minute C race.

Virginia Tech dominated the men's A criterium and had the overall winner both days.

King finished high enough on Saturday to regain the ACCC points leader jersey, but didn't race on Sunday, allowing the Hokies' overall winner from both days to move up from fourth to first in the individual standings. In the team points totals, Virginia Tech solidified its first-place standing while the Flames moved back into third position as second-place Navy did not compete.

The Flames will have this weekend off before going to West Virginia University on April 2-3, for a road race and criterium in Morgantown, W.Va. Assistant Coach Van Phillips will travel with the team while Spencer takes six women and four men from Liberty's triathlon teams to the spring season-opening Smithfield (Va.) Triathlon. That will include Anderson, who did not compete in the fall and still needs to qualify for the April 22-23 USA Triathlon Collegiate Nationals in Clemson, S.C.