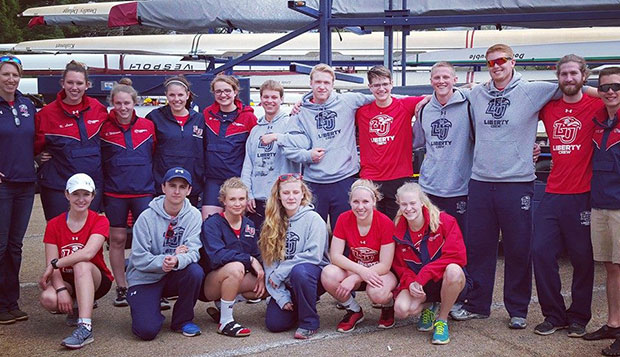 "It went pretty well for our first race of the season," first-year Head Coach Debbie Prowse said, noting that the team just started training on Smith Mountain Lake on March 7. "Coming off spring break, when we had beautiful flat water and perfect temperatures all week long, was helpful for the novice rowers."

After not fielding a team in the fall, the Flames' men's novice four finished second in its six-boat heat with a time of 8 minutes, 26.137 seconds in the 2,000-meter race, nearly 30 seconds behind the University of Central Florida's winning "A" boat (7:56.882).

Liberty's women's novice four finished fourth out of five boats in the second flight, but seventh out of 17 boats overall in 9:51.96. Freshman Savannah Perry was the coxswain on that boat with senior Maddie Feden rowing in the stroke seat, freshman Rachel Peed in the three seat, freshman Baillie Knecht in the two seat, and freshman Emily Enoch in the bow seat.

The Lady Flames' women's varsity four got out to a delayed start, one or two strokes after the rest of the field, after a strong headwind forced the race marshal to implement a "quick start."

Needing to place in the top three to advance to the finals, Liberty finished fifth out of seven boats in its heat and 10th out of 14 overall in 9:31.136, behind Virginia Tech (fourth in its heat in 9:17.85).

"We know what we have to work on in the stroke sequence," Prowse said. "We have to get more miles under our belt and row a little better together, improving our rowing timing and application of power right off the catch."

Prowse plans to take more boats and crew members to the April 2 Clemson Sprints at Lake Hartwell (S.C.), where the Flames will enter a novice eight and possibly a men's pair while the Lady Flames race with a novice four and a varsity four before teaming up for mixed eight and mixed four events.