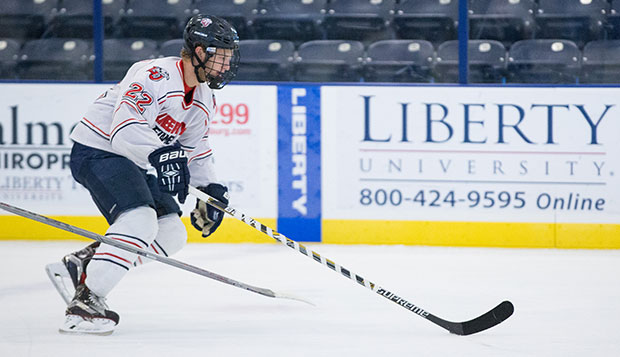 Liberty graduate forward Christian Garland netted his 20th and 21st goals of the season to knot Sunday's game at 3-3.

Overtime was required to decide the winner — and the tournament's fourth Final Four qualifier — between top-seeded Liberty University and second-seeded William Paterson in Sunday's third and final round of pool play in the ACHA Division II National Championships in West Chester, Pa.

It only took a little more than a minute of the sudden-death extra period for junior forward Devon Docksteader to end the contest with a one-timer top-shelf past the end of goalie Jordan Hulahan's stick off a feed from the back left corner from senior forward and head captain Paul Ingles for a dramatic 5-4 triumph.

The Flames (29-3, 3-0 in pool play) had rallied from a 3-1 second-period deficit to seize a 4-3 lead early in the third before the Pioneers responded to tie it at 4-4 just over three minutes later.

A tie after 10 minutes of overtime would have sent William Paterson (24-8, 2-1) to the Final Four, due to the tie-breaking procedure, but for the second year in a row, its season ended on an overtime goal.

Forward Adam Apidopoulos gave the Pioneers a 1-0 advantage just over six minutes after the opening faceoff, finishing a rebound into an open right side of the net past Liberty graduate goalie Blair Bennett. Less than 10 minutes later, Paterson capitalized on a power play to make it 2-0 when defenseman William Kapp jammed the puck on multiple stabs blocked by Bennett before taking it behind the net and feeding forward Eric Sabato in front for the finish with 4:30 left in the first.

Just over five minutes into the second, the Flames got on the scoreboard with a nifty play on a two-on-one breakaway started by sophomore defenseman Adam Gnatowski, who accelerated along the right boards before sending a pass to sophomore forward Tim Bierema cutting through the high slot. He fed a backhanded pass to graduate forward Ryan Kerr who slammed it home from the left crease, trimming the deficit to 2-1.

However, just over a minute later, William Paterson got that goal back on a counterattack when James Bobb buried a rebound off a shot from fellow forward Kyle Garlasco, stretching the Pioneers' edge to 3-1. Liberty struck back even more quickly to pull within 3-2 when graduate forward Christian Garland controlled a loose puck out front after a shot by Kerr and skated left to right before lifting a wrist shot into the top right corner.

After the Pioneers were called for icing seven minutes later, Garland tied it at 3-3 by punching in his third chance from near the right post with 5:52 left in the second. Then, less than a minute into the third, junior forward Ben Freymond won a faceoff in the left circle to Ingles whose shot bounced off the boards back to Freymond who beat Hulahan to the five-hole from the left crease to give the Flames their first lead.

Garlasco became the Pioneers' all-time leading scorer when he set up forward Mark Apidopoulos with a pass from behind the net for the finish in the left crease with 15:54 remaining in regulation, which is how it stayed until Docksteader's dagger in the first two minutes of overtime.

Liberty will face Miami of Ohio in Monday's second semifinal, starting at 3 p.m., after Grand Valley State — which eliminated defending champion New York University, 4-3 in overtime — takes on Florida Gulf Coast University in the first contest at noon. The winners will advance to Tuesday's championship game, set for noon. Watch live webcasts through YouTube, posted on the ACHA website.

Three of the teams that reached the Final Four — all but Grand Valley State — are from the Southeast Region, where Liberty was ranked No. 1 for most of the season.