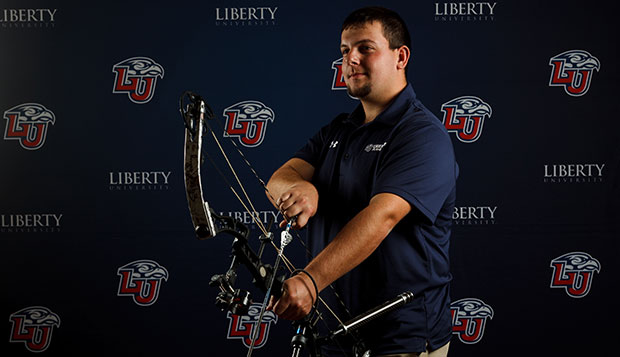 Members of Liberty University's men's and women's archery teams had strong individual showings in the United States Collegiate Archery Indoor National Championships, based on their results at the March 5-6 South Region competition held at Kentucky Christian University in Grayson, Ky.

"For more than half the team, this was their first shoot ever, and we had a couple of them finish in the top 10," Liberty Head Coach Mitch Reno said.

"We took her out to Illinois last year (for the 3D USIAC Outdoor Nationals) and she finished fourth overall, which was pretty impressive for a freshman, and there's nowhere to go but up," Reno said.

"Both Ian (Rigney) and Hunter (Jacobs) had issues with their bows the first day," Reno said. "Hunter's sights were not compliant, even though he's used it three years in a row, so we had to work on his sights and remove some parts on it. Once we got it straight, Hunter ended up shooting the highest rounds of his life. The next three rounds, he was killing it. If he had shot on the first day what he shot the last three, he would have placed in the top three."

Two more sophomores competed in the College Basic Bow category in their first shoots with the Lady Flames and Flames, with Susannah Martin placing fifth and Devin Stauffer 13th.

"Ian and Hunter are graduating, but we have a very young team, so each of the returning archers have different goals for next year to move up and improve," Reno said. "So hopefully, by their senior years, they'll be in the top 10, too."