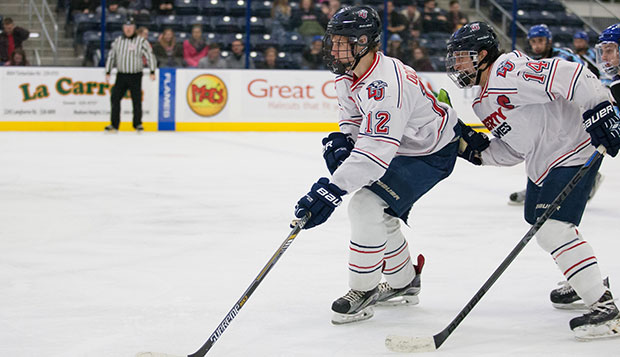 Liberty's Paul Ingles (right) gives Devon Docksteader a push in the first game of a sweep of Florida Gulf Coast on Jan. 29, in the Flames' last home series at the LaHaye Ice Center.

It didn't take long for Liberty University's Division II men's hockey team to shake the rust off its skates in Friday's first round of the ACHA DII National Championships at the Ice Line Quad Rinks in West Chester, Pa.

The top-seeded Flames (27-3) held fourth-seeded Arizona State University's Maroon team scoreless for all but a 22-second stretch of the second period, when the Sun Devils trimmed a three-goal deficit to one. The Flames netted the only goal of the third period to secure the 4-2 triumph in the first round of pool play.

Liberty, playing its first game since being eliminated in the second round of the MACH tournament on Feb. 20, got excellent production from their top line of senior forward and head captain Paul Ingles (two goals, one assist) and junior forwards Ben Freymond (four assists) and Devon Docksteader (one goal), with sophomore forward Tim Bierema adding a goal.

"Our guys played hard," Flames equipment manager Tyler Sands said. "ASU's a good team, but we stuck to our systems, stuck to our guns and our top line was really rolling tonight. Freymond, Docksteader, and Ingles are starting to pick it back up again and do what they do."

Ingles scored the first period's only goal with 5:46 to go, putting away the first of four assists by Freymond, who initiated a fast break with great individual stickwork and a strong rush toward the net.

"We knew coming off a month-long layoff, it would be hard, but we emphasized taking one shift at a time to our team," Freymond said. "We were just trying to win every battle."

With 7:14 remaining in the second period, Bierema converted a putback of Freymond's shot from the top of the right circle to stretch the lead to 2-0. Four minutes later, Liberty seized what appeared to be a commanding 3-0 advantage on a three-on-two counterattack sparked by Freymond's behind-the-back spin outlet pass and capped by Ingles shot from deep in the left crease.

ASU-Maroon trimmed the deficit to 3-2 with two goals in a span of 22 seconds with just over two minutes to go in the second. Moments after Flames graduate goalie Blair Bennett blocked a three-on-one scoring chance by the Sun Devils' Thad Asa, ASU capitalized on a two-on-one opportunity when Jake Savona finished a crossing pass from Mason Teuber top shelf from the right crease.

Then, with 2:02 left in the second, Savona showcased some fancy stickwork through the high slot and lifted a quick shot past Bennett into the upper netting to the Sun Devils get right back into the game.

Liberty held a 44-26 shot advantage for the contest and padded its lead to two goals with just under 11 minutes left in regulation when Freymond blocked a shot and lost his stick on the defensive end, but still managed to kick the puck out to Ingles, who accelerated through the neutral zone and assisted Docksteader in the left crease for a backhanded finish top shelf.

"We had a little bit of a mental lapse (late in the second period), but the guys recovered well from it and got right back," Sands said. "That was clutch, coming in there in the third. The next goal was very important. We were applying our systems like we've done all year. We've got to play our game and see what happens tomorrow."

The Flames will take a 1-0 record into Saturday's second-round match against third-seeded Lindenwood, a 6-1 loser Friday to second-seeded William Paterson, which Liberty will face Sunday at 3 p.m. in the third and final round of pool play. The tournament schedule and links to live webcasts available through YouTube are on the ACHA website.