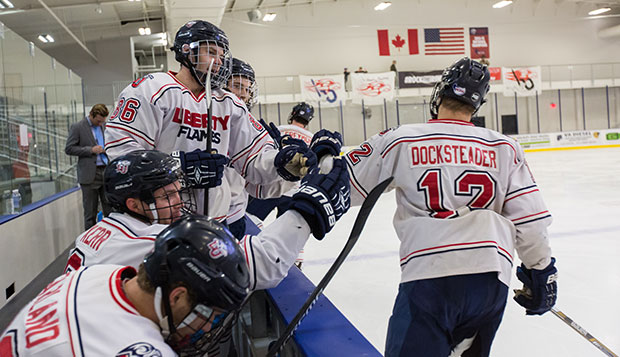 Liberty junior forwards Ben Freymond and Devon Docksteader, the Flames' top two scorers, celebrate a goal in the first game of a sweep of West Virginia on Jan. 9 at the LaHaye Ice Center.

This weekend in West Chester, Pa., Liberty University's ACHA DII men's hockey squad will make its third consecutive nationals appearance, playing three games in its pool Friday through Sunday with the goal of advancing to Monday semifinals for the first time since 2006, when the Flames lost to Oakland in overtime in the championship game.

To get there, Liberty (26-3), the top seed out of the South Region, will have to get past Arizona State's Maroon team (26-6-1), the No. 4 seed out of the West Region — one of two DII teams at nationals for the Sun Devils — Friday at 3:15 p.m.; Lindenwood (16-13-1), the No. 3 seed out of the Central Region, Saturday at noon; and William Paterson (22-7), the No. 2 seed out of the Northeast Region, Sunday at 3 p.m. Paterson, which earned its seventh autobid to nationals over the past eight seasons, could be the biggest obstacle.

"The thing about nationals is everyone is coming in hot and riding momentum, either by securing an autobid as a No. 1 or 2 seed or by winning their regional tournament," said Liberty Head Coach Chris Lowes, whose team received its first autobid. "You can afford to lose a game and make it out of your pool, but it puts you behind the 8 ball. You need some bounces to go your way."

He expects any rust the Flames have accumulated over the past month to wear off quickly, especially since they have maintained a high level of intensity in their practices over the past few weeks.

"We've been off for a little over four weeks, but teams will be, just like us, a little bit unpolished from not having been in game situations," Lowes said. "The guys are focused and I've seen a difference in this year's team. Part of that's leadership, our veteran's presence, and experience from the past couple years. I really like the makeup of our group."

The Flames finished 2-1 and 1-2 in their past two national tournament appearances, winning and losing their openers against Grand Valley in overtime before narrowly missing advancing out of their pool in 2014 with a third-round loss to New Hampshire, the eventual champion. Last year, Liberty's only win came against eventual champion New York, 9-1, in a meaningless final round of pool play.

"The momentum and confidence carries over from year to year and raises the expectations in the locker room," Lowes said. "Hopefully, with the success we've had this season, we might play a little looser, with a little more confidence. When you play tight, it tends to lend itself to mistakes and not playing your best hockey."

Games in four different pools will be played on four different rinks simultaneously at noon and 3 p.m. over the weekend at the Ice Line Quad Rinks. The tournament schedule and links to live webcasts available through YouTube are on the ACHA website.