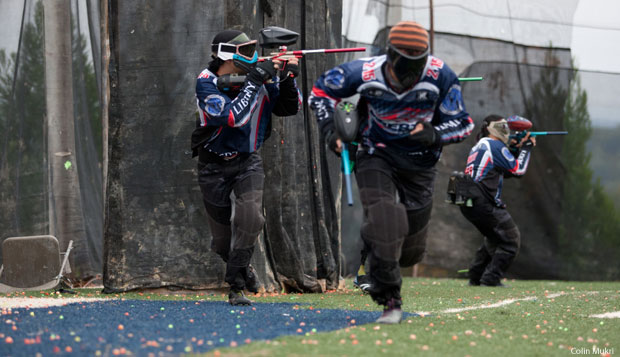 The Flames paintball team opened its season at home with the Liberty Open tournament.

The Liberty University paintball team began its 2012-13 season on familiar turf, the Liberty Paintball Fields, on Saturday where they hosted the Liberty Open.

In round two, Liberty Red faced off with the purple team from Clemson University, easily earning the sweep for the Flames' first win of the day. Liberty Blue took on the Georgia State Panthers and fell 2-0.

Liberty Red opened the third round of pool play against the maroon team from Virginia Tech, and the Flames claimed their second sweep of the day.

Liberty Blue picked up its first win of the day over VMI 2-0.

Liberty Blue opened the final round of pool play needing a victory over Clemson's orange team to advance to the knockout round and the Flames delivered with a 2-0 sweep over the Tigers. Liberty Red also advanced despite a 2-0 loss to the Virginia Tech Hokies "A" squad. Liberty Red advanced over Coastal Carolina because they had more total games won in pool play than the Chanticleers (5 games to 4), who lost 2-0 to the maroon squad from Virginia Tech in the final round of pool play.

In the knockout round, Liberty Blue drew Eastern Kentucky, who finished with a 3-0-1 record in pool play. After a Flames victory in the first game, the Colonels rallied to take the match 2-1.

Liberty Red swept N.C. State in the quarterfinals, 2-0, to advance to the medal round.

In a very competitive semifinal match, Liberty Red faced the undefeated Panthers, with GSU gritting out a 2-0 sweep. Georgia State would go on to defeat the Virginia Tech "A" team to claim the Liberty Open title.

"For our first tournament, we did pretty well," said Todd Hoglund, Flames head coach. "We have some things to work on but both squads did well. We need to work on things like our breakouts and not exposing ourselves in lanes, but all in all it was a good weekend."

Liberty finished third at the 2012 National Collegiate Paintball Association National Championships (read more) and, with new players this season, looks to build on their success. The Flames next tournament is TBA.