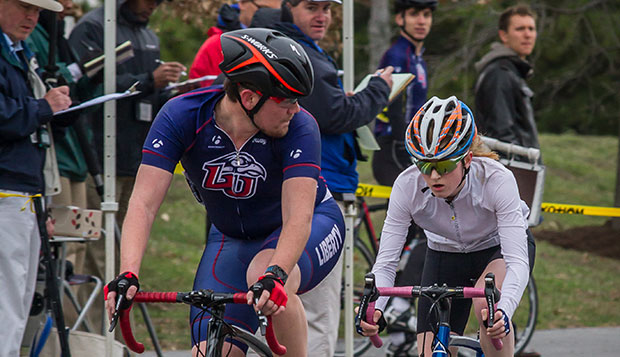 Liberty freshman Brandon Siller helped eventual women's winner Svetlana Mack back on her bike and allowed her to draft off of him to the finish line of Sunday's circuit race in Columbia, Md.

Since the event occurred over many teams' spring breaks, a limited number of riders competed, and race directors opted to combine the Women's B and Men's C categories into one field. About 17 laps into the 20-lap, 31.5-mile Gateway Circuit Race, Svetlana Mack, the leading women's cyclist, went down after being cut off by a male rider.

Sacrificing his own position within the pack, Siller stopped to help Mack — a high school junior from nearby Kensington, Md., who races for Rock Creek Velo — fix her bike and get back on the road, enabling her to win her first race of the season and third in the past two years.

"I was right behind them and saw this guy cut across and undercut her bike and she fell," Siller said. "I saw that the guy got up and left and that her chain had fallen off, so I swung back around to help her get her chain back on. She had road rash and it took her a while to get started again, so I said, ‘I'm just going to let her draft off (follow) me for the rest of the race.'"

Mack, who was born in Russia and adopted as an infant, was surprised and appreciative of the Good Samaritan who crossed her path after another rider had crossed wheels with her.

"I don't think he realized that he knocked me down," Mack said of the other cyclist. "After I crashed, (Siller) stopped and turned around and said, ‘I'll pull you back up.' The pack got too far by the time we got back on the road, but he offered to pull me around the course for the last three laps. It was very helpful, very nice."

Siller estimated he lost five minutes by offering his assistance, but he said it was worth it in the end.

"She was struggling around turns and wasn't able to accelerate," Siller said, noting she scraped her knee on the fall. "Going down is not fun, but finishing a race after going down is really not fun. I tried to make the pain more manageable."

Liberty Head Coach Parker Spencer, who also coaches Siller on the Flames' triathlon team, was proud of his rider's selfless act of sportsmanship.

"One thing I have really stressed as a team is I want them always to be training and competing at their best and have made it clear that this does not always mean winning," Spencer said. "This being our first year, it's all about reputation. We want to be known as a team that races with integrity. Our mission is to represent Christ at every competition. Brandon didn't win on Sunday, but he made sure that an athlete on another team was OK and helped her out. That was just as significant as winning."

Liberty's men's and women's cycling teams will be back in action this Saturday and Sunday for a road race and criterium hosted by ACCC-leading Virginia Tech in Blacksburg, Va.