Flames arrive at FSU, warm up for three games in four days 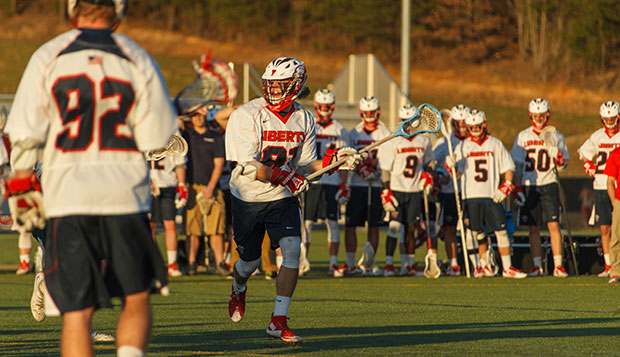 Coming off three victories that extended its home winning streak to 21 games and raised its record above .500 for the first time this season, Liberty University's men's lacrosse team arrived in Tallahassee, Fla., on Monday for a three-game spring break road trip.

"We wanted to get here a day early to work out the tightness you sometimes get on those long bus rides," Flames Assistant Coach Mike Zumpano told Club Sports Video Coordinator Gabe Henderson, who traveled with the team. "We're out here loosening up, we've got the game later tonight, but we're getting focused, tying up some loose ends, getting the guys prepared for what we think is going to be a good week of lacrosse."

Liberty (3-2), ranked 19th in the latest MCLA Division I poll, will face Texas State on Tuesday before challenging host Florida State on Thursday and South Florida on Friday. (Texas State dropped four spots to No. 20 in the poll after losing to unranked FSU 15-4 on Monday night.) All three games are scheduled for 7 p.m. faceoffs.

Zumpano said although the Flames opened the season with losses to No. 12-ranked Boston College and No. 6 Georgia Tech on Feb. 20-21 in Atlanta, they should thrive playing in the warmer climate.

"We've got a few guys who somehow they play better once the weather gets nice," he said. "It's a good atmosphere. It's good to get a few road games in … to come down to a nice environment and give guys a chance to play lacrosse, obviously — this is certainly a business trip for us — but also to get the opportunity just to kind of bond as a team, being in a different atmosphere. Florida's a good place for that, so we're excited to be here."

Based on the rankings, Liberty should be favored in all three matchups, but completing a three-game sweep on a foreign field will be a challenge and Zumpano said the focus will be on the experience.

"We're hoping to be able to get some wins under their belt this week, certainly, but definitely want to give the guys a chance to enjoy their spring break as well," he said.

The Flames will return to the Liberty Lacrosse Field for their annual Midnight Mayhem game, against Florida, at 11:59 p.m. on April 1.