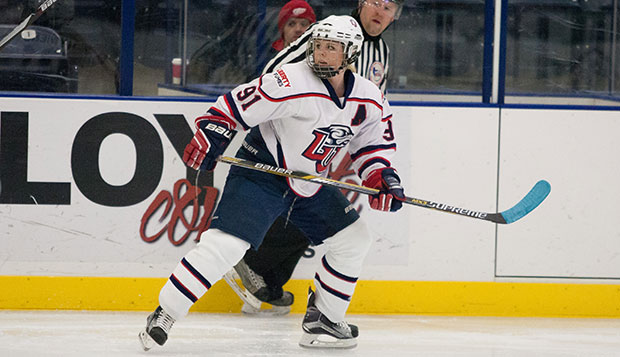 Liberty senior defenseman Brittany Hymers took the shot that freshman forward Lauren McDonald tipped in for the game-winner midway through the third period.

Entering the third period tied at 3-3, the Lady Flames scored three unanswered goals, capped by an empty-netter by senior forward Catharine Burrell, to improve to 23-3-1 on the year, avenging their only blemish on an otherwise ACHA season, Nov. 21 on the Lakers' home ice.

Liberty, which clinched its fourth consecutive Final Four bid on Thursday, will take a 3-0 record into Saturday's first semifinal game, set for 1:30 p.m. against 2014 national champion Miami of Ohio in a rematch of last year's final won by the Lady Flames, 4-1. The second-seeded RedHawks lost their final game of pool play to fourth-seeded Adrian, 4-3. The Bulldogs will meet the Lakers in the second semifinal at 4 p.m.

For the second night in a row, Liberty had to overcome a 1-0 deficit after Tia Greca put the Lakers on the scoreboard first. Senior forward and head captain Carrie Jickling, who had a hat trick in Thursday's 6-5 win over Lindenwood-Belleville, tied it up at the 13:12 mark of the first period by putting away the rebound of a shot by Burrell, who had stolen the puck on the offensive end.

Lady Flames sophomore goalie Rosie Kelly, making her second straight start, made a save of a point-blank shot in the five-hole to preserve the tie late in the first period and made two more saves, one off a wrist shot by senior forward Kendra Myers, back-to-back early in the second stanza.

With Grand Valley State on a power play, Myers finished out front to lift the Lakers to a 2-1 lead with 14:50 remaining in the second. But Liberty responded quickly, tying it back up a minute and a half later when Burrell fed Jickling on a fast break and she maneuvered around a Grand Valley defender in the right circle before finishing with a backhand past Lakers junior goalie Taylor Watson.

Graduate forward Nikki McCombe and freshman forward Lauren McDonald nearly gave the Lady Flames the lead, but their shots within a span of 30 seconds from in the left circle careened off the left and right posts. It didn't take Liberty long to capitalize on its second power-play opportunity to seize a 3-2 lead as sophomore forward C.J. Tipping set up Jickling for a shot from the right circle and Burrell slammed home the rebound from the open left side of the goalmouth.

But Grand Valley State didn't waste any time netting the equalizer just 28 seconds later when Katie Danto took a pass from fellow senior forward Hillary Daniels from the back boards for a wide open top-shelf finish from out front.

McDonald had a shot rejected by the crossbar early in the third period before finally cashing in for the go-ahead goal, tipping in a shot from the high slot by senior defenseman Brittany Hymers off an assist from McCombe for a 4-3 advantage with 9:15 remaining in regulation.

McCombe then finished a beautiful backhanded assist from McDonald skating behind the cage to extend the lead to 5-3 with 2:47 to go before Burrell made a steal near mid-ice for the empty-netter in the final minute.