Flames stay in fourth place after Day 2 of NCWA tournament 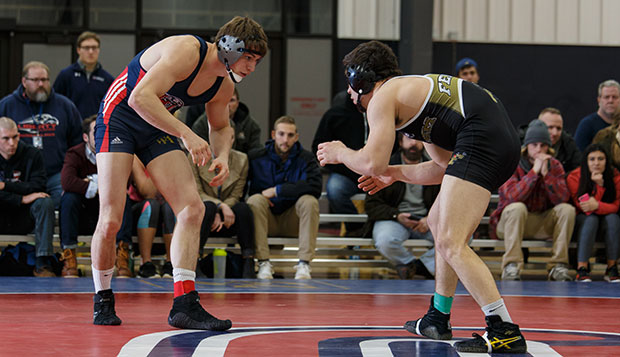 Junior Josh Ferenczy, seeded second at 174 pounds, advanced to the title bout with an 8-6 victory over Akron's Shane Brown in the championship quarterfinals and 11-1 major decision over Grand Valley State's Bailey Bischer in the semis. He will meet Central Florida's top-seeded Geordan Speiller for the title.

Also at 174, Liberty freshman Taylor Westlake defeated UMBC's Brandon Buckingham, 6-4, in his second consolation round match before pinning Texas State's Noah Villermarett in 2:43 and dropping a 2-1 decision to Brown to narrowly miss a top-eight All-American finish despite going 3-2.

Liberty junior 235-pounder Charles Hancock, meanwhile, lost a 9-3 decision to Connecticut's Steven Webb in his championship quarterfinal before being eliminated by Rickey Carter, the No. 1 seed out of Florida A&M, by a 5-1 decision.

At 125 pounds, Flames freshman Dell Ngonga won his first two rounds of consolation matches — by 16-0 technical fall in 3:20 over Northeastern's Yuval Shatil and 10-3 decision over South Florida's Rory Roderick. His tournament ended with a 2-0 loss to Apprentice's Ty Boyd, who had rallied to defeat Ngonga, 6-5, in the closing seconds of their teams' third-place final at the NCWA National Duals.

In a battle between teammates at 149 pounds, Flames junior Ike Podell pinned sophomore Jonah Swinson in 16 seconds before scoring a 9-2 decision over Grand Valley's Jake Sobeck. However, he came up on the short end of an 11-9 decision against Antonio Martinez of Texas.

Liberty freshman Brian DiCesare was eliminated with a 6-3 decision to Penn State DuBois' Garrett Brown in the 133-pound consolation bracket.

Complete brackets are updated live on the trackwrestling.com website.

Wrestling will resume at 9 a.m. with consolation bracket action before the championship finals are set for 6 p.m. Live action can be viewed with a subscription to FloWrestling.com.