Incoming defenseman from Alberta has family ties to Flames 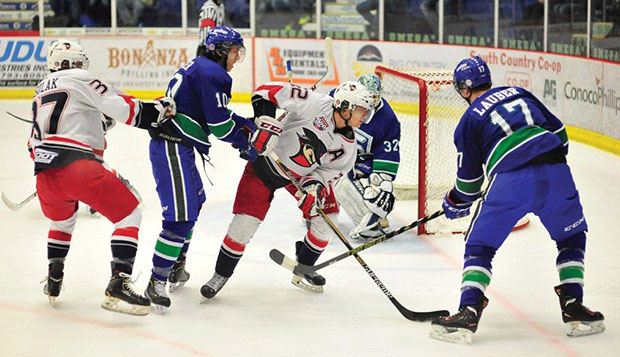 Chaydan Lauber (right) has played for three teams in the Alberta Junior Hockey League, most recently the Drumheller Dragons.

"I flew down and toured the campus," Lauber said. "I got a good feeling about the place. I met with a few of the captains, a total of five players, and it feels like one big family. I'm really looking forward to being around so many good people and knowing everyone around you believes in the same thing you do. Hopefully, I can be a leader for this team both on and off the ice and help them win the (ACHA Division I) National Championship."

Lauber is in his third season in the Alberta Junior Hockey League (AJHL), which produced former Flames forward Lindsay LeBlanc. He played for the Olds Grizzlies in 2013-14 and the Calgary Canucks in 2014-15.

"He's a big, strong defenseman and a guy who will be an excellent addition both on and off the ice for us," Liberty Head Coach Kirk Handy said. "He sees the ice well. He'll be a great addition on the back end to give us some size and strength. He's going to come in and work hard and be real steady back there."

Lauber is firm in his faith and stands up for what he believes in, a sign of an excellent leader.

"I'm strong-willed and don't care about standing out or being different," he said. "I'm not easily moved on what I believe or think's right."

"My coach told me this year, ‘Everyone else on the team has changed to fit in. You're the only one who's been the same person since you've been here,'" Lauber said.

Lauber has connections with Liberty's coaching staff and team as his father is a second cousin of Flames Associate Head Coach Jeff Boettger and a first cousin of Jeff Shantz — a distant cousin of Liberty graduate defenseman Peter Shantz — who played center for the Chicago Blackhawks, Calgary Flames, and Colorado Avalanche during a 10-year NHL career.

"(Boettger) and my dad played hockey together a long time ago for a year and he came down to watch our goalie on the Canucks that year when I played for Calgary," Lauber said. "He watched me, too, and liked what he saw. He knew I came from a Christian family, and we've been talking from then on, and he's been watching (webcasts of) my games."

The projected business management or administration major has aspirations to continue his hockey career after college.

"I would love to do that, given the opportunity," Lauber said. "That is a goal of mine to move on after college. I'll see what God has in store."

His backup plan is to work for his father's auto dealership, as he has in recent summers washing cars to help pay for his own before hockey season, which starts in August and runs through March, "or April, or possibly even longer if you go all the way," Lauber said.

On Thursday, the Dragons seized a 1-0 lead in their best-of-five series with the Camrose Kodiaks with a 4-1 victory in the first round of the AJHL playoffs.

"We've had a pretty decent year and throughout the year, I've been given more responsibility and put out in more situations, on power play and penalty kill," Lauber said. "I'm hoping to help us win some games in the playoffs."

Lauber, who enjoys hunting, fishing, golfing, and dirt biking when he's not on the ice, wants to make his final season of Junior "A" hockey last as long as possible and is looking forward to playing four seasons with the Flames.

"I enjoy and excel in all aspects of the game," Lauber said. "I consider myself an all-around defenseman that can be put out there in any situation — blocking a shot or being put out there on power play, to score a goal. I work hard on whatever my assignment is and hopefully contribute to the team win."