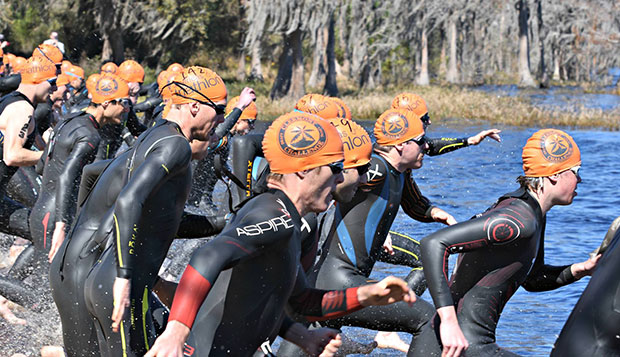 "This was one of the most competitive draft-legal races in the country so we wanted them to get a taste of it before nationals," Flames Head Coach Parker Spencer said, noting Liberty's top two contenders in the Mid-Atlantic Conference, Marymount and Queens University, competed as teams.

Anderson and Merryman turned in particularly strong showings in the sprint-distance races, with Merryman placing 13th on Saturday in 1 hour, 10 minutes, 28.8 seconds and seventh on Sunday in 1:08:50.3, behind two professional triathletes and two others from Canada. She completed her 750-meter swim in 12:05, her 20-kilometer cycling stage in 34:45, and her 5K run in 19:44, improving her times by nine seconds in the water, 1:07 on the bike, and four seconds on the run.

"Megan just continues to improve and continues to impress, against some of the top athletes in the country," Spencer said. "One of the big draws of this race is the top three men and top three women in each race qualify as a professional triathlete. The goal was not necessarily to do that for Megan, in her first experience at a draft-legal race. But if she had finished just two places higher, she could have made it as a professional."

"Joey had a lot of success when he went pro, but we decided to downgrade him to an amateur license just for a year or two so that he can nail the basics and use his run to his strength as he usually does and rack up as many wins as he can," Spencer said.

"We're trying to take a long-term perspective to it all and make sure he's where we want him to be five years from now, looking more at the development in the process. We're still seeing improvement. He does want to do this at the pro level and be competitive."