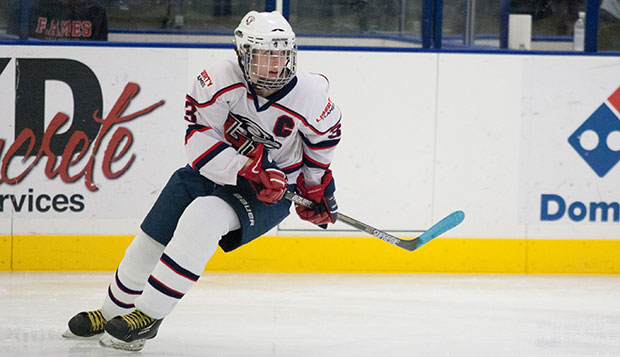 The Lady Flames (22-3-1) overcame an early 1-0 deficit to seize a 3-1 lead on senior forward and head captain Carrie Jickling's hat trick before fending off repeated comeback bids by the Lynx in a 6-5 victory that clinched their fourth consecutive trip to the Final Four. Lindenwood (18-8-2) was eliminated from Final Four contention with its second loss after dropping a 3-2 decision to third-seeded Grand Valley State in Wednesday's opener.

Freshman defenseman Hayley Winker got the Lynx on the scoreboard with the first of her two goals, beating Lady Flames sophomore goalie Rosie Kelly for an early 1-0 lead.

With 11:01 left in the first period, Jickling tied the contest at 1-1 on a two-on-zero breakaway with Lady Flames freshman forward Lauren Pillisch, slipping the puck past a defenseless Firth Bidois, Lindenwood's sophomore goalie from New Zealand.

Jickling, positioned in the left crease, lifted Liberty to its first lead at the 14:19 mark of the second period when she one-timed senior forward Catharine Burrell's beautiful no-look backhanded pass from the back boards. She extended the advantage to 3-1 after receiving another feed from Burrell, this time starting a fast break up the center of the ice before faking out a defender in front and skating to the right crease and lifting a sharp-angled backhander past Bidois.

Winker trimmed the deficit to 3-2 by sticking in a rebound of her own shot past Liberty sophomore forward Chelsey Greenwood and blocked by Kelly from deep in the left crease with 1:51 left in the second period.

Lindenwood, which only capitalized on one of its nine power-play opportunities, missed a golden chance to tie the game with a five-on-three advantage for the final minute and a half of the second period and first 30 seconds of the third. The Lynx finally cashed in on a five-on-four power play shot by Reagan Fuller from the right side off a cross-ice assist from fellow sophomore forward Maddy Miller. That was originally ruled no goal, after it trickled through the pads of Kelly before sophomore forward C.J. Tipping cleared it off the goal line. But upon video review, the puck was determined to have crossed the line and the game was tied at 3-3 with 17:51 left in regulation.

Just over four minutes later, Liberty reclaimed the lead on another goal that required a video review. Jickling sent a pass from the right circle back to Tipping at the blue line where she launched a shot that Burrell deflected past Bidois into the lower right side of the cage. The Lady Flames were called for goalie interference on the play, but the video replay cleared them of those charges and the goal stood for a 4-3 Liberty lead with 13:43 to play.

But Lindenwood retied the contest less than four minutes later, at the 9:48 mark, when Ashley Dietmeiar redirected a shot by fellow sophomore forward Alahna Stivers past Kelly for the first of four goals in a span of less than five minutes.

Just 46 seconds later, Lady Flames senior defenseman Brittany Hymers put the Lady Flames back on top, 5-4, by rocketing a shot from the top of the left circle into the upper netting. Forty seconds after that, Greenwood padded Liberty's lead to two goals by receiving a pass from Jickling and launching a shot from inside the left circle that glanced off a defenseman's stick and between the legs of Bidois to make it 6-4 with 8:22 on the clock.

However, the Lynx responded with 5:01 remaining on a breakaway score by Fuller, who beat Hymers, skating without a stick, down the left wing before lifting her backhanded wrist shot into the upper netting past Kelly for the final score.

Two more power-play opportunities after hooking penalties against Liberty made the final four minutes of action even more suspenseful. Kelly used her glove to make one of her biggest saves of the game at the end of the first before the Lady Flames narrowly missed two empty-net scores in the final 1:18 with Lindenwood playing six-on-four hockey.

On Friday, the Lady Flames will conclude pool play with a showdown with Grand Valley State, the team that handed them their only ACHA loss on Nov. 21 in Allendale, Mich. The puck drops at 7:45 p.m. with a live webcast available.