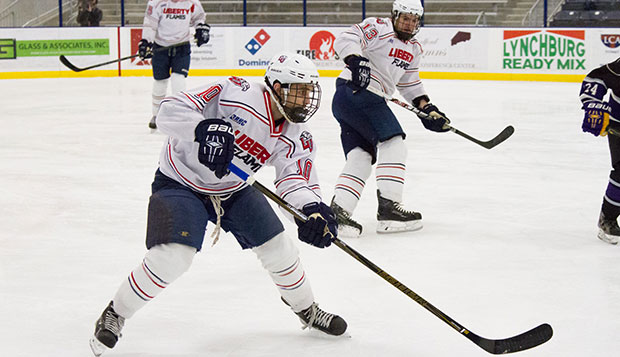 Senior forwards Braden Taylor (10) and Jeremy Martin (13) play in their last series at the LaHaye Ice Center on Feb. 13.

Facing the No. 1 seeded Oakland (Mich.) Golden Grizzlies in the first round, Liberty was outshot by a 60-16 margin, including 26-3 in the first period when it was outscored 5-0 en route to a 10-0 final. Oakland capitalized on six of their eight power-play opportunities while the Flames finished 0-for-4.

With only one team advancing out of each pool, that loss put the Flames' backs against the wall and they were never able to recover, losing to second-seeded Metro State University of Denver by a 9-1 count on Wednesday before falling to California University of Pennsylvania by a 6-4 final in a battle between 0-2 teams on Thursday afternoon.

Metro State outshot Liberty 57-13 — including 24-3 in the second period when it netted five goals, the last three on a power play — before taking an 8-0 lead with a fourth score on a man advantage 42 seconds into the third. Sophomore forward Jonathan Klakring ended the shutout with 8:59 remaining in the third off assists from senior defenseman Parker McIntyre and junior forward Caleb Weesner.

Cormack and senior goalie Daniel Flaherty combined for 48 saves before junior Jake Petsch started between the pipes against Cal-Penn, making 26 saves as the Flames were only outshot by a 32-31 margin.

Liberty scored the only first-period goal when freshman defenseman Nathan Glick finished assists from McIntyre and senior forward Jeremy Martin with 12:48 to play. Cal-Penn netted the next two scores before Klakring evened it at 2-2 with a power-play goal assisted by freshman forward Travis Swyers and junior forward Kade McDaniel. Senior forward Markus Deas, returning from an injury that kept him out of the South Regional playoffs in Orlando, Fla., scored Liberty's final two goals, drawing it back within 4-3 and 5-4 in the third period before the Flames allowed an empty-netter in the final minute.