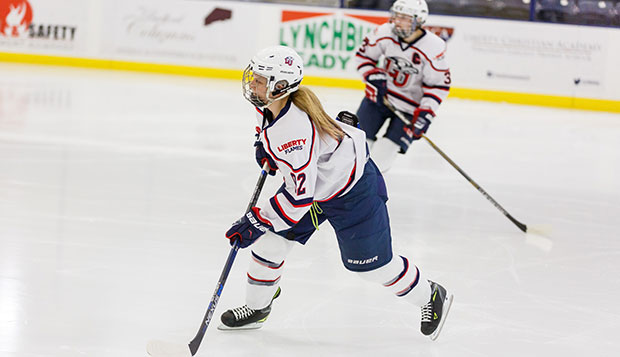 Twice in Wednesday night's ACHA Division I National Championship tournament opener at Wings Arena in Kalamazoo, Mich., eighth-seeded Michigan cut Liberty University's lead to one goal — 2-1 midway through the second period and 3-2 early in the third.

But both times, the top-seeded defending national champion Lady Flames responded quickly to keep the Wolverines (10-10-4) at bay. Liberty (21-3-1) eventually pulled away for a 5-2 triumph, avoiding an upset in the first round of pool play.

Michigan forward Jennifer Cusmano ended Lady Flames freshman goalie Kelly Hutton's shutout bid by beating her with a shot through the five hole with 9:51 to play in the second period. But after Greenwood''s shot through the legs of Wolverines goalie Julie Chenoweth was overruled by an offsides call upon video review at the 8:00 mark, Gilmour capped a three-on-two break for a 3-1 Liberty lead with 5:44 left.

Then, after Michigan's Caroline Hurd scored with 15:27 remaining in regulation, Jickling picked up a loose puck in the left circle and finished with a well-placed wrist shot 37 seconds later. Less than five minutes later, Pillisch started Liberty's transition game with a pass to the center of the ice before pouncing on the putback of a shot on goal by Jickling and backhanding the puck into the open net for the final score.

The Lady Flames will continue pool play with games against sixth-seeded Lindenwood-Belleville on Thursday and No. 3 Grand Valley State on Friday, with the puck dropping at 7:45 p.m. both nights.

National Championship tournament games are being webcast live by the ACHA.