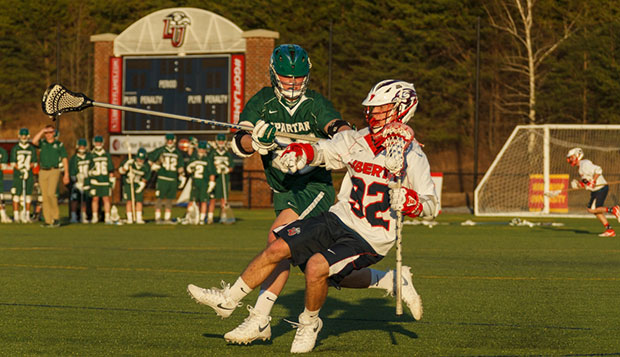 Up by four goals with four and a half minutes left in the third quarter, Wednesday night at home against Michigan State, the 19th-ranked Liberty University men's lacrosse team's offense was in need of a spark to put the 16th-ranked Spartans away.

The Flames (3-2), had been shut out for nearly nine minutes after being held to one goal in the second quarter. So senior midfielder Bryce Mrakovich took matters into his own hands, battling his way through MSU's defense and taking a few stick checks along the way before unleashing a spectacular behind-the-back shot into the upper netting.

That extended Liberty's lead to 9-4 and helped the Flames secure a 13-6 triumph, their 21st consecutive win at the Liberty Lacrosse Field, dating back to April 10, 2012.

"That was pretty," Flames Head Coach Kyle McQuillan said. "Having goals like that always ramp things up a little bit and give you a boost of adrenaline, especially on the sidelines. Anything that gets the guys up on the sidelines and gets everybody excited is OK in my book. We had quite a few pretty looking goals tonight so it was good to kind of keep the morale high."

"Overall, I think our offense and defense stepped up huge," Bernardo said. "When we were in the locker room before the game, there was so much focus. We had a rough opening weekend in Atlanta (with losses to No. 12 Boston College and No. 6 Georgia Tech) and we had two wins before this (over SELC Northwest Region foes George Washington and West Virginia). Coming out here, we saw the ranked opponent and we knew the opportunity that we had right there. There was just a hunger for today's win."

Junior midfielder Chad Moore hit the crossbar with his turnaround shot from out front before MSU attack Stevie McKee ended the shutout. Miller scored on a drive along the left endline and later set up the final goal of the first quarter with a great crossing pass to Lombardozzi for a point-blank finish from right in front for a 6-2 Flames advantage.

"The first quarter we came out and were able to get that separation and we never really let them gain any momentum to get themselves back into the game," McQuillan said. "Overall, we were a lot more consistent than we've been in the past for four quarters. The guys did a great job of that tonight."

Bernardo and freshman attack Sam Gregory hit crossbars with back-to-back shots early in the second quarter before Bernardo received an assist from Miller and made a move through the right side of the box before finishing with a running shot to stretch the lead to 7-2.

MSU's Trevor Sabo got one back with 5:41 left in the first half before Liberty freshman goalie Matt Nichols made a big save to preserve the Flames' four-goal advantage.

Meanwhile, senior midfielder Charles Fianko won 16 of his 24 faceoffs to put the Flames on attack from the start.

"Chuck is such a difference-maker," McQuillan said. "The same thing is true with goalies, but the faceoff guy is such an important part of this game and Chuck did exactly what we asked him to do tonight. We knew we weren't going to win every single faceoff, but he definitely gave us the advantage."

Gregory and sophomore midfielder Morgan Pitts started the fourth-quarter scoring for the Flames and junior defenseman Max Fontaine ended it in the final 16.9 seconds.

"Our team is really starting to click now," said Bernardo, who scored one goal in each quarter. "We had to really reexamine our team from that first weekend and we've got a lot of cylinders rolling, but we're still hungry and we've got to keep eating."

The Flames travel to Tallahassee, Fla., over their spring break next week for three games in four days, starting against No. 20 Texas State on Tuesday, No. 26 Florida State on Thursday, and South Florida on Friday. All three games start at 7 p.m.

"From here on out, it's really competitive lacrosse," McQuillan said. "Next week, we're playing a lot of really good competition down in Florida, so hopefully this will give us the momentum we need."