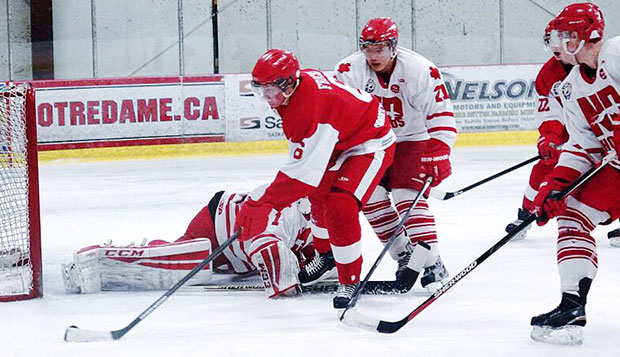 Jacob Fricks totaled six goals and 23 assists as a defenseman with the Langley Knights in 2014-15 and has three goals and eight assists in 27 games with the Red Wings this season.

With three defensemen and four forwards from this season's squad due to graduate in May, Liberty University ACHA Division I men's hockey coaches have hit the recruiting trail hard this year. They received a commitment from the first member of what shapes up to be a large incoming class last week — Jacob Fricks, a 6-foot, 3-inch defenseman who has netted three goals and eight assists in 27 games with the Weyburn Red Wings of the Saskatchewan Junior Hockey League (SJHL) this winter.

"We are excited to bring Jacob Fricks into the Liberty Hockey family," Handy said. "He will be a solid addition to our team and I love what he will bring to the program both on and off the ice."

Fricks, 20, started playing hockey at the age of 4 growing up in Seattle before moving to California when he was 10. He will be one of at least five Californians on the roster next season, matching this past year's total.

"I know a few of them, including freshmen forward Zechariah Roberts," Fricks said on Friday by phone from Weyburn, where the Red Wings are getting ready for the SJHL playoffs. "(Hockey is) getting really big in California (but) it's a way of life here in Canada. It's a big difference."

Also like a few current Flames, including forward Ray Wilson and Josh Halpenny, Fricks has ties to the Fellowship of Christian Athletes, having attended hockey camps run by its national director for hockey, Rick Randazzo, and former Liberty Assistant Coach Jake Hannon the past two summers in Buffalo and Niagara, N.Y.

Fricks' interest in playing the sport at Liberty stems from his desire to further his hockey career as well as grow in his faith.

"I know that they're looking for players who can play the game, people who want to build the team up," Fricks said. "I want to grow spiritually and compete for a national championship in the ACHA."

The probable business management major at Liberty expects to make an immediate impact on the ice, though he's anticipating an adjustment period.

"The level of competition will be comparable to the SJHL," said Fricks, who considers himself an all-around player who gets the job done. "Depending on what the team needs, if we're looking for a goal, I can play that role. I want to go out there and do my thing — work on shutting down top players and allowing our players to find the back of the net."

Prior to joining the Red Wings, Fricks played for the Pacific Junior Hockey League's Langley Knights in 2014-15, scoring six goals and distributing 23 assists in 44 games, and the 18-and-under Anaheim Junior Ducks in 2013-14.