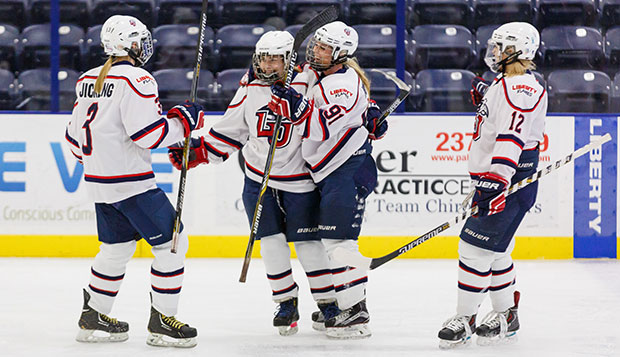 Liberty's ACHA Division I women's hockey team will seek to successfully defend its National Championship on Wednesday through Sunday in Kalamazoo, Mich.

Postseason competition is about to heat up for many Liberty University Club Sports teams preparing to travel to national events held up and down the East Coast and across the United States. National tournaments begin this week and will continue over the next two months.

The defending ACHA Division I women's hockey national champions, ranked first in the past four national polls, are favored to reclaim their crown. Competing in Kalamazoo, Mich., they will play three games in their pool — against Michigan on Wednesday, Lindenwood-Belleville on Thursday, and Grand Valley State on Friday at 7:45 p.m. The top two teams will advance to the Final Four, set for Saturday and Sunday.

The Flames wrestling team, which placed third in the NCWA National Duals, Jan. 22-23 in Dalton, Ga., has 17 wrestlers, the same number as last season when it captured its first NCWA tournament title. Liberty's wrestlers will vie to reach the championship and consolation finals, Thursday through Saturday in Kissimmee, Fla.

Fourteen members of Liberty's men's and women's ski & snowboard teams begin competition Tuesday in the USCSA National Championships on Whiteface Mountain at Lake Placid, N.Y., site of the 1980 Winter Olympic Games. The Flames and Lady Flames will enter individual women and complete men's teams in the Rail Jam on Tuesday, the Slopestyle events on Wednesday, and the Boardercross and Skier-Cross races on Thursday and Friday, respectively.

This past weekend, Liberty's archery team had two individuals earn medals in the regional competition of the United States Collegiate Archery Indoor National Championships, where senior Ian Rigney was the defending national champion in the men's bowhunter division.

For the third consecutive year, Liberty is sending three of its five hockey teams to national championship tournaments.

The Flames (26-3) clinched their first autobid into the tournament and will be the No. 1 seed out of the South Region in a pool that also includes Northeast Region No. 2 seed William Paterson, Central Region No. 3 seed Lindenwood, and West Region No. 4 seed Arizona State University's Maroon squad. As in the DIII National Championships, only the top team out of each pool advances to the Final Four set for March 21-22.

Liberty's thriving Club Sports program has 35 distinct teams competing in 19 sports, featuring a total of more than 500 student-athletes. Every season, several teams and individuals participate in regional and national tournaments in their respective sports.