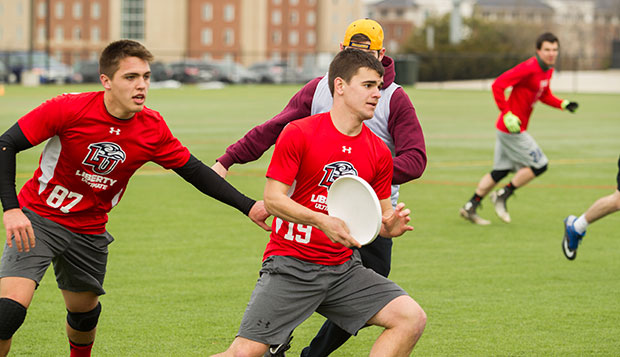 After placing fourth in Saturday's six-team pool play, Liberty University's men's Ultimate team finished fifth — one spot higher than it was seeded — out of 11 teams in the playoffs of Sunday's spring season-opening Chesapeake Classic, played at Deep Creek Park in Chesapeake, Va.

The Flames went 4-4 with two of its losses coming against the only other Virginia Conference opponents in the field — No. 2-seeded George Washington University, 13-5 in Saturday's first round of pool play, and top-seeded Virginia Commonwealth University, 13-6 in Sunday's quarterfinals.

Liberty concluded Saturday's pool play with a 13-7 loss to seventh-seeded Salisbury, a 12-11 win over No. 10 Maryland's B team, seeded 10th, and a 15-4 loss to third-seeded Vermont. Liberty was short four of its starters on Saturday which forced some players to move to new positions.

On Sunday, Liberty wrapped up pool play with a 13-9 victory over 11th-seeded Gannon University before falling into the fifth-place bracket with the loss to No. 1-seeded VCU.

"On Sunday, we pulled things together," Flames Head Coach Brendan Phillips said. "We hit the reset button and started all over again and played much better. As play went on, our energy level picked up, we cut down on miscues, and saw steady improvement. I couldn't be prouder of the way the team played. Everybody contributed at least a goal and an assist this weekend."

"Connor is a great all-around player who got our energy level up," Phillips said. "He's one of our most experienced players and he played very well. His versatility on defense helped us a lot."

Freshman cutter Noah Jantamaso and sophomore handler Evan Herlihy exceled on both sides of the field.

"Noah was a big asset for us downfield on offense, making a lot of big catches for easy scores," Phillips said. "Evan was one of our main handlers this weekend and made a game-saving play against the Naval Academy with a lay-out knockdown on the goal line."

Herlihy played 101 out of 155 points over the weekend.

Liberty will travel to Richmond, Va., March 19-20, to compete in the 16-team River City Tune-up including many more Virginia Conference foes.