Fire on the Mountaineers: Flames torch WVU (with video) 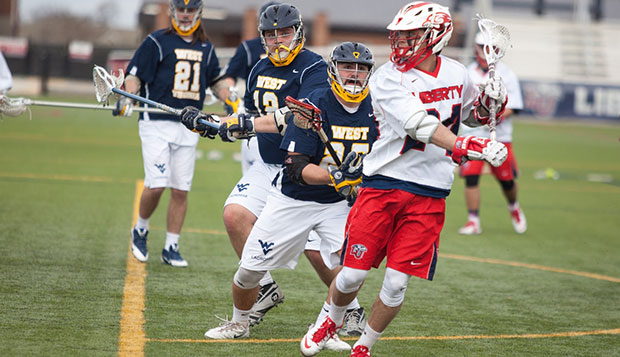 Flames senior midfielder Brett Bernardo is surrounded by West Virginia players as he looks for a teammate to pass to, Saturday at the Liberty Lacrosse Field.

"When you score 20-some-odd points, you're going to have a couple hat tricks in there," Flames Head Coach Kyle McQuillan said. "It was good and hopefully the guys get used to it and we can have these point totals for the rest of the year."

Senior midfielder Bryce Mrakovich scored a team-high five goals to pace the attack as Liberty outshot WVU by a 53-11 margin.

"Bryce is one of those guys that sometimes he doesn't show up on a stat sheet, but every time we play, I'm always getting comments from other coaches and other players about how much of an impact player he is," McQuillan said. "Today, he was definitely able to show up on the stat sheet. He had a great game and I was happy for him."

Lombardozzi scored the game's first goal just 1 minute, 24 seconds after senior midfielder Charles Fianko won the first of his 18 faceoffs in 22 attempts. A minute later, Lombardozzi dodged toward the middle and set up Miller cutting across the crease for an easy finish and a 2-0 lead. Bernardo then threaded a pass through traffic to Gregory for a point-blank score falling down in front to make it 3-0 with just over three minutes elapsed.

With just under a minute remaining in the first, the Flames extended their lead to 6-0 on a spectacular transition score started by senior defender Brandt Grauss, who saved the ball from going out of bounds near the right sideline by whacking it past a WVU player to Mrakovich near midfield. He sent it up to Bernardo in the left crease for the fast-break finish.

Moore started the second-quarter scoring just 34 seconds after the faceoff by rifling a shot off an assist from Bernardo into the top right corner of the cage. Eight seconds later, Lombardozzi deposited an assist from Miller into the lower right corner past Mountaineers starting goalie Christopher Peters.

Miller later assisted Mrakovich cutting through the left side of the box for an across-the-body shot that found the net before Lombardozzi set up sophomore attack Morgan Pitts for a running finish through the left crease, extending Liberty's lead to 12-0.

WVU finally ended the shutout, with Joey Esposito starting the second-half scoring and the Mountaineers playing even with the Flames at 2-2 for the third quarter. But Liberty netted the game's final 10 goals, eight in the fourth quarter which started with Moore pocketing a tough-angled shot off an assist from Miller before Bernardo scored on a side-armed shot off assists from Moore and Mrakovich.

The final score was by the same eight-goal-to-one ratio as Liberty (2-2) had beaten George Washington last Saturday at home, winning 16-2. McQuillan was even more pleased with the Flames' performance against the Mountaineers (1-3).

"The guys just proved again that they're willing to make the changes that we're asking them to," he said. "There were a lot of improvements from the last game to this game. One of the things we wanted to focus on was having more of a transition game and I think that was evident. We still need to work at keeping our guys out of the penalty box. At some point here we're going to put everything together. I think we're getting closer to that."

This Wednesday at 5 p.m., Liberty hosts Michigan State — ranked No. 14 in the MCLA Division I poll ahead of the No. 17 Flames — before facing Texas State, Florida State, and Southern Florida on its spring break road trip.

"The last two games were definitely good practice for the bulk of our season that's coming up," McQuillan said. "We've got three ranked opponents now in a row and we get to come home after our spring break trip for a midnight game (April 1 against Florida) and Virginia Tech (on April 15). I like the way this team is building. I like the direction that the guys are growing in and we'll be ready (for MSU) come Wednesday, for sure."