Archers focus on top finishes at indoor nationals in Kentucky 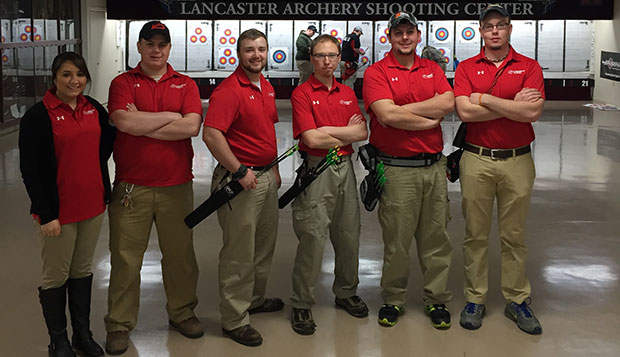 The Kentucky competition is one of four regional shoots going on simultaneously, after three were held last weekend. The regional events will determine the national results.

"The scoring is completely electronic," Liberty Head Coach Mitch Reno said. "There will be a TV screen with a running tally of all the scores around the country and we will know before we leave there who the champion is in all of the divisions."

Senior Ian Rigney, the defending national champion in the men's bowhunter division, will be among the favorites while the Flames should fare well across the board with a deeper quiver full of archers to draw from, including a few freshmen.

"The will be the largest team we've ever brought to any competition and a fairly strong group," Reno said. "Our goal from beginning has been to grow the team. Now, we're adding quality rather than just numbers to continue the winning tradition that the archery team has established."

He said the team is especially strong in the compound and bowhunter divisions, led by senior Mark Jacobs and sophomores Dustin Garner and Jason Lynch.

"We have someone shooting in every event except women's bowhunter, so we're able to cover a lot more categories and with the quality we've added, we have a better shot at bringing home higher scores," Reno said. "Each competition, the goal is to increase their score and improve their finishing place over the previous one. The goal for the team is to have at least two or three top-five finishers."