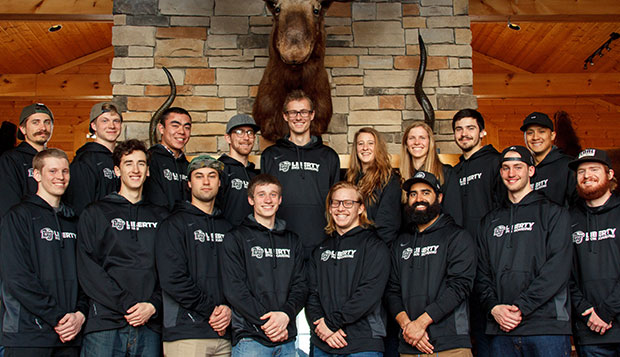 Members and coaches with the ski and snowboard team pose for a picture in the Liberty Mountain Snowflex Centre lodge.

The Flames will spend Monday practicing on the Slopestyle course at Whiteface Mountain, also site of the 2014 USCSA national championships and 1980 Winter Olympics, before beginning competition in the men's and women's Rail Jam on Tuesday, Slopestyle on Wednesday, Boardercross on Thursday, and Skier-cross on Friday.

"This winter has had super cold temperatures and they've been able to make snow, so the park has pretty good conditions up there," said Flames Assistant Coach Kevin Manguiob, who will take some of the coaching responsibilities from Head Coach Ryan Leeds, who is staying back due to his wife expecting their first child.

"The rest of the team is pretty new," Manguiob said. "It'll be interesting to see how they do. It's going to be much stiffer competition. We kind of saw a glimpse at regionals of how different the parks are at bigger resorts. We've been trying to remind the newer guys and girls on the team to expect very large jumps at nationals and to try to get it into their minds to really ride aggressively."

"They've come a long ways since the beginning of the season and have a lot more confidence going into these events," Manguiob said. "They've learned a lot and their skills have definitely advanced. One of the hardest things for people who learn freestyle tricks at Liberty Mountain Snowflex Centre is transitioning them to snow and this year, we've had a lot more days at Wintergreen (Mountain Resort, where the Flames have season passes) than last year."

The coaching staff has also made it mandatory for three days of physical workouts per week, improving their core strength in their legs and their cardiovascular conditioning. That gave the Flames a clear advantage over their competitors in the last Rail Jam event, Jan. 31 at Appalachian (N.C.) Mountain.

"Some of the other teams were winded by hiking up the Rail Jam and our guys were getting in as many runs in as possible to show themselves to the judges a lot more than their opponents," Manguiob said. "We'll be able to get a lot more drops in."

Liberty's women's and men's teams will look to improve upon their third and fourth respective Rail Jam finishes at last year's nationals at Mount Bachelor in Bend, Ore., to build momentum for the Slopestyle competitions and Boardercross and Skier-cross races.

USCSA national competitions will be webcast live throughout the week.