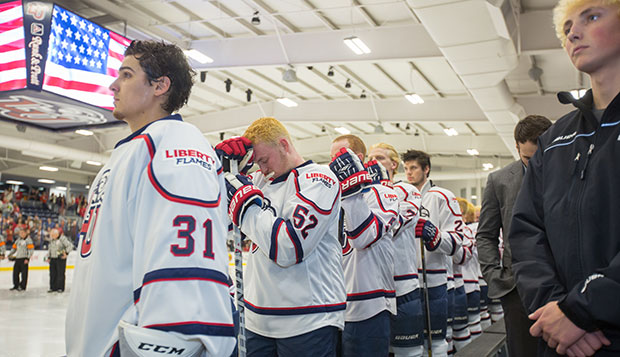 Members of Liberty's ACHA Division I men's hockey team stand for the National Anthem on Oct. 23, 2015, the night of the grand reopening of the renovated LaHaye Ice Center.

The Flames — who were ranked No. 18 in the final regular-season poll and narrowly missed making their ninth trip to ACHA DI Nationals in the past 10 seasons — will face even better international competition overseas.

Liberty Associate Head Coach Jeff Boettger first experienced playing hockey overseas on a similar bridge-building, cultural trip as a 20-year-old with a team from Canada and the United States.

"From that grew a desire to see this happen here, because it had a huge impact on my life," said Boettger, who along with Head Coach Kirk Handy took the Flames to Sweden in 2007, to Southern Russia in 2009, and to Latvia in 2013. "Whether it's from the cultural perspective or the heart perspective, there's a lot of growth that can occur from experiencing something like this. I took my family last time. It was an awesome experience."

A total of 20 of Liberty's 25 players and three of its four coaches will be making the trip to two cities in East Asia, where they will play that country's U20 and senior national teams as well as a Russian club team and a university team from South Korea.

"I'm excited," said one of Liberty's goalies who will travel with the team. "We don't really know too much about them, so it will be interesting. It'll be really cool to see all the differences, especially with the sports aspect of it. I know we're eating meals with a bunch of the teams and doing some sightseeing, so it'll be pretty cool."

Besides the four games, Liberty coaches and players will put on two hockey clinics for area youth in the East Asian cities where they are staying.

Liberty Assistant Coach Marc-Andre Bourdon has helped put on hockey camps in Switzerland, Sweden, and Slovakia, and traveled to play in a couple other places in Europe, but never in Asia.

"It's a good opportunity to shine a light and try and impact some people, though East Asia's not an easy place," he said. "We want to do our best. But we go there for other purposes. These things are life-changing, to get out of the comfort of your house and see other cultures. Every time I go somewhere else, I always come back and appreciate things more. It makes me grow as a person."

Boettger expects the Flames will play in front of sizeable crowds for the two games against host teams.

"In the first city, it's a 10,000-seat stadium and they're expecting to pack it out," he said. "They haven't had that type of an event with an international team in about 20 years, so that will be pretty exciting."

The Flames will be decided underdogs against the senior national team, playing on Olympic-sized ice, 15 feet wider than that in the LaHaye Ice Center.

"I'm anticipating that to be a really fast game and high-end hockey," Boettger said. "It's a 200-feet by 100-feet playing surface so we've just got to be really smart out there."

He is looking forward to engaging in a cultural exchange with opposing players and fans after the games.

"There's a lot of different impact opportunities," Boettger said, noting there will be two or three interpreters available. "We will eat with the U-20 national team throughout the four days we're there because we're staying really close together. We'll eat and share our stories with them. Sports can break down barriers, whether it's hockey or any other sport."

Handy, who will be joining the team for the second half of the trip, along with his wife, Jannie, said the fundraising effort — of $2,200 per player — may have seemed overwhelming at first. But Boettger, who coordinated the trip planning with LU Send as well as the tour coordinator connected with Athletes in Action in Russia, was instrumental in the team reaching its goals.

"Jeff's done a phenomenal job," Handy said. "It's a phenomenal undertaking, not only with the logistics, but to raise the money. That's the biggest thing. It'll be an exciting opportunity for the guys to go over there."

The team also raised $1,200 to go toward the trip through a late-night student skate at the LaHaye Ice Center on Jan. 23, on a weekend when the Flames' scheduled games against Michigan-Dearborn were snowed out, and another $1,200 from a fundraising game between the DI and "D4" teams on Feb. 21.

"(The fundraising game) was a great opportunity and a fun environment for everyone to play in," Handy said. "It takes some creative thinking to try to come up with options like this for our guys to help go on the trip."

Donations to help cover outstanding costs can be made through the LU Send portal for the East Asia team, or by contacting Boettger at hockey@liberty.edu.