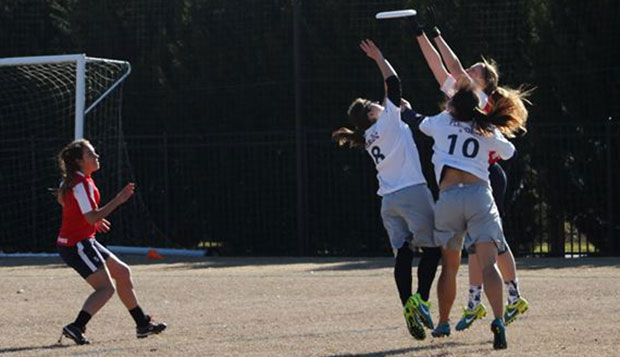 Katherine Clark goes up in traffic to bring down a pass over two North Carolina defenders, giving Liberty an early lead in an eventual 11-9 loss to the 23rd-ranked Tar Heels.

After winning its Tier-II pool and moving up to the Tier-I playoffs, Liberty University's women's Ultimate team finished 11th out of 25 teams at this past weekend's Commonwealth Cup, held at the Smith River Sports Complex in Axton, Va., site of the Atlantic Coast Regional Tournament.

"We had never been to this tournament before and it was a real growing experience for all of the newer players," Lady Flames Head Coach Jonathan Mast said. "Saturday was their time to shine and then on Sunday, our veterans really did well and I couldn't be prouder. We turned a few heads. It's nice to see all that hard work pay off."

Liberty, which debuted at No. 30 in the USA Ultimate preliminary national rankings after being ranked No. 145 three seasons ago, 118th in 2014, and 54th at the end of last spring, went 5-2 in the tournament. The Lady Flames swept Oberlin, 12-5, the University of North Carolina's B team, 13-0, and the University of Pennsylvania, 14-7, in Saturday's pool play. That put Liberty in the four-round playoffs where it lost to UNC's No. 23-ranked A team, 11-9 in the opener, after leading 3-1 early on an incredible catch in traffic by sophomore cutter Katherine Clark.

"It was a moral victory for us," Mast said. "All the girls came out swinging, so it was really nice to know we could compete with them. I can't wait to see them again at regionals."

That dropped the Lady Flames into the ninth-place bracket where they defeated Cornell, 15-5, sparked by junior handler Jillianne Hook's two Callahan goals — interceptions in the opposing end zone.

"We traded points, then we got in a rhythm and walked away with it," Mast said. "Jillianne's defense was stellar that game and those two goals demoralized them."

Liberty then lost to Penn State — a team it had defeated in the championship game of last spring's River City Tune-Up V — by a 15-5 score.

"They have improved a ton, but we basically handed the disc to them," Mast said. "Their first five points were all off errors on our part."

The Lady Flames concluded the tournament by winning the 11th-place match against MIT by the same 15-5 count, scoring almost at will against zone and man-to-man defenses.

"She was one of our main offensive deep threats and skied multiple times in double coverage to come down with a lot of throws," Mast said. "She did an exceptional job."

Liberty's goals were fairly evenly distributed, as were its assists. Graduate Krista Johnson was the team's top scorer while all five of the Lady Flames' handlers recorded assists, led by sophomore Jennifer Vachon, Hook, and Sydney Dawson.

The Lady Flames are waiting to hear if they are invited to compete in a tournament hosted by UNC Wilmington on March 19-20. If not, they may travel to one hosted by JMU in Harrisonburg, Va. 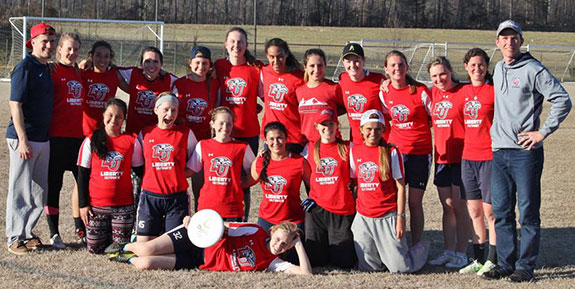