Flames gear up for nationals at BRAWL Series, Clemson 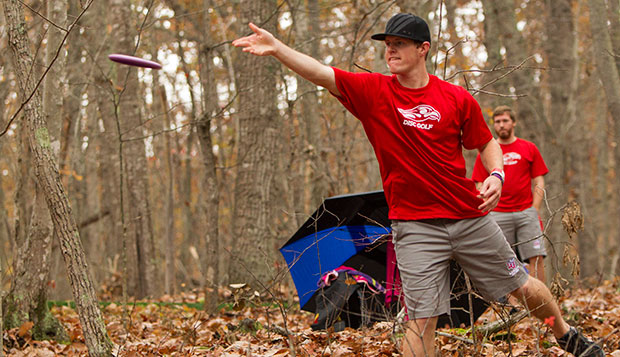 Liberty senior Lance Brown follows through on a shot in the woods on the Flames' home course near Camp Hydaway during the Flame Thrower Invitational this past fall.

Lady Flames senior Sarah White remained in first place in the Ladies division, competing with a group of men as the only female player at Walnut Creek. In the Intermediate division, Liberty had the third- and fifth-place finishers, juniors Jesse Edgin and Ed Lipscomb.

The Flames will enter two teams with Brown, Towns, Shumate, and graduate Dan Ballard in one group and graduate Devin Swartz, senior Hunter Bass, freshman Hunter Thomas, and junior Jon Younce on the other card.

Then, after concluding the BRAWL Series, the Flames will send their top four-man team to play two rounds at the Tri-State Challenge, April 2 at Rolling Pines, a new course in Wilkesboro, N.C. That competition — against NC State, North Carolina, UNC Greensboro, and East Tennessee State — will serve as a tune-up for the April 13-17 National Collegiate Disc Golf Championships in North Augusta, S.C.

Besides White, Bowman hopes to have senior Hannah Croke and sophomore Dayna Slusher available to compete at nationals along with Grace Dial, a new player the Lady Flames picked up this semester.

"We're trying to get them some reps so they'll be ready to step up and compete at nationals," he said. "Hopefully, they will be at our next and last BRAWL Series event (March 12 at Timber Ridge near Bedford)."