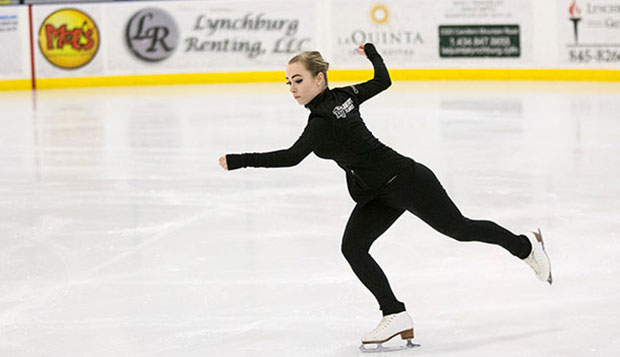 Liberty University's figure skating team placed sixth out of 16 teams with 29 points at this weekend's U.S. Figure Skating Intercollegiate Eastern Sectional competition, held for the sixth time in the past seven years at the LaHaye Ice Center.

"Sibylle has come a long way and has moved up several levels this year," Liberty Head Coach Jamie Swyers said. "She successfully skated a new short program with several very difficult elements and her outstanding and near flawless long program was one of my highlights from the weekend. The judges obviously agreed and unanimously gave her first place."

Another highlight was Thacker's routine in International Dance, the highest level a skater can compete in dance.

"Katherine Thacker skated the incredibly difficult Silver Samba dance," Swyers said. "This was her first time competing at this level and we were proud of how well she performed."

"This event was a learning experience for the team," Swyers said. "We did some great things this weekend and came away with a better understanding of where we can improve."

She said the weekend competition was a success, with coaches and competitors complimenting the renovations that improved rink access and expanded locker rooms and amenities.

The Lady Flames will compete in their third and final Eastern Sectional event, March 12-13 at SUNY Geneseo in New York.