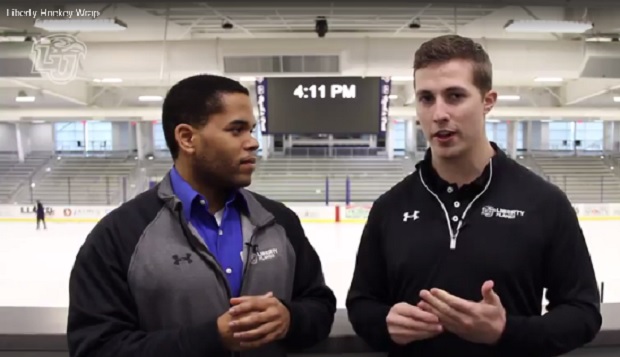 Brandon Cockburn and Patrick Strawn, video & media coordinators for Liberty University's Club Sports department, look back at the seasons of the ACHA Division I, II, and III men's and Division I and II women's hockey teams on this week's Liberty Hockey Wrap.

They talk about Liberty's DI men's team joining the ESCHL for next season and what offseason moves the Flames will look to make to get back into the postseason picture.

Cockburn and Strawn also discuss how Liberty's DII men's team clinched its third consecutive trip to the DII Nationals, March 18-22 in West Chester, Pa., and first autobid by finishing ranked No. 1 in the South Region poll.

The show was filmed before the Flames' DIII men team found out last week that it will play in its first National Championships, March 8-12 in Grand Rapids, Mich. That's the same week the Lady Flames DI women, ranked No. 1 for the past four polls, try to successfully defend their national title, March 9-13 in nearby Kalamazoo, Mich.