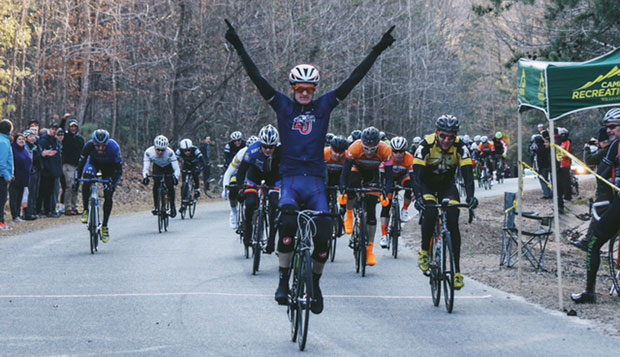 Sophomore Jake King, an online student from near Charlottesville, won his first race in a Liberty uniform, Saturday at the Tidewater Winter Classic in Williamsburg, Va.

"It was definitely the way we wanted to start out," Liberty Head Coach Parker Spencer said. "We wanted all the guys to experience that race together as a team and for them to be able to work together and it ended up being really successful."

King and Sonnery-Cottet, sophomores based in Charlottesville studying through Liberty's online programs, showed they could be ready to challenge for men's and women's national titles.

After one team broke away early in his 50-mile race, King led the rest of the pack for the next 30 miles with very little draft support.

"It was a very large field and Jake started near the back and wound up pulling the whole peleton back to the breakaway group by the last 200 meters, when he was able to put together a really strong sprint and win by a couple bike lengths," Spencer said.

Sonnery-Cottet raced with both collegiate and professional (Cat 1, 2, and 3) women and defeated all but one of the professionals in her 30-mile race.

"There was a lot of strategy in that race," Spencer said. "Marie sat in with a group and let some of the other girls move up to the front and when it came down to the end, she put in a monster sprint to outkick everybody."

"Everybody was in a big pack," Spencer said of the 20-mile race that included two laps around the course in York River State Park. "They were working well together. With cycling, so much strategy comes into play. You don't have to be the strongest rider. A lot of it is about conserving energy."

Anderson and freshman Ethan Krohn will be eligible to move up to the "B" level after getting their ninth and 10th starts this weekend, when Liberty travels to Saturday's road race in Raleigh, N.C., and Sunday's Bull City Grand Prix, a criterium around the Durham Athletic Park, hosted by Duke.

Spencer will categorize all of his men's riders up to the "C" level this weekend and after 10 starts or a first-place finish, they can move up to the "B" level. He noted that USA Cycling only allows "A" riders to compete in the Collegiate National Championships. Spencer's goal is to have all of his riders in the "B" category by the end of the season.

"If they can win some races or score really high several races in a row, then they can category up to ‘A'," he said. "We're setting the stage for next year when we'll go into it with the strategy of moving them up to ‘A' so we can have a full team at nationals."

The Flames will have six more race weekends, including the April 23-24 ACCC Championships hosted by NC State in Raleigh, N.C., before Collegiate Nationals are held May 13-15 near Asheville, N.C.