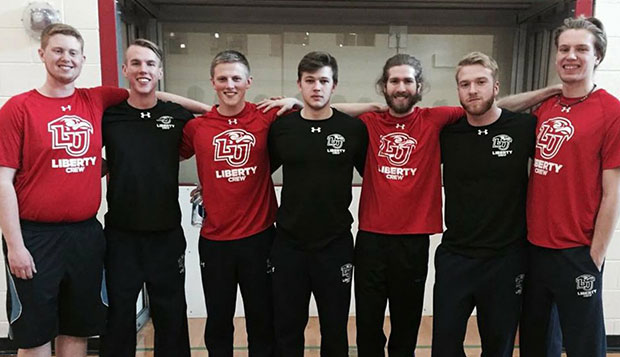 "I was really happy with the way they performed," Prowse said. "They did really well, and pushed themselves beyond what they thought they could do. It was really a nice chance for us to get on the road as a team and build that team spirit. We're really looking forward to getting on the water where we can put some miles in, working on our technique to get ready for the upcoming race season."

Besides Liberty and host William & Mary, Richmond, JMU, VCU, Mary Washington, and NC State were represented in the collegiate races.

"Both of their times were personal records so that was really exciting for them," Prowse said. "They really pushed themselves."

In the men's novice category, freshmen Josh Elliott and Zach White, who both joined the team last month, placed eighth and ninth, respectively, out of 32 competitors in 6:57.3 and 6:58.

"They're super strong athletes and did very well for their first 2Ks," Prowse said. "There are so many variables and technique plays a big part on the water where it doesn't on the erg. We'll see how it translates when they get to the water, but they look promising."

The Flames and Lady Flames will conclude dryland practice this week and take to the water at Smith Mountain Lake, their new base of operations, on Monday.

"Both teams will be having double practices every day over Spring Break leading up to the John Hunter Regatta in Gainesville, Ga., on Saturday, March 19. That's kind of like the kickoff to the spring season, at the tail end of a lot of schools' spring breaks."