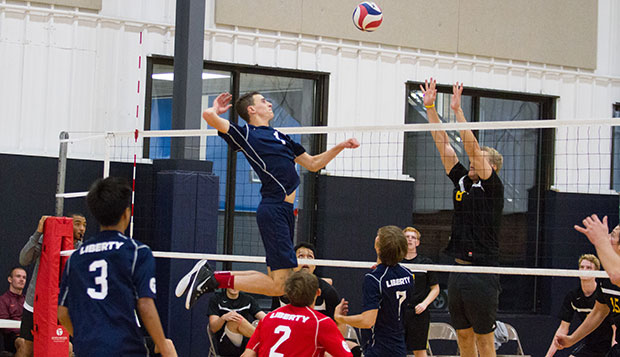 On the second and final day of the Hoosier-Illini Classic, Liberty University's men's volleyball team won its final match of pool play against No. 22-ranked Northern Illinois, 25-23, 25-19, to improve its seeding for the silver bracket playoffs.

"Everything was going well," Flames Head Coach Bryan Rigg said. "We were passing much better and able to run our sets to the middle, and our outside sets were going well, too. We weren't getting a ton of defensive plays, but our offense was really clicking this morning."

However, after winning the first game of its quarterfinal match against unranked Illinois State, Liberty was eliminated in heartbreaking fashion, 17-25, 26-24, 15-13.

"Most of the games we lost over the weekend we played pretty well in defeat," Rigg said. "This game, we got a little too casual. It seemed like it was going to be easy to put them away after the first game and we started to make too many errors. Then, when you get to a third game, it's anyone's match at that point."

The Flames went up 5-1 in the third game before letting Illinois State rally as it had in the second, when they lost five of the last six points after holding a 23-21 lead.

"We can't let teams hang around like that," Rigg said. "In the second and third sets, at times we were winning by four or five points. We made a few passing errors that led to hitting errors, balls hit out of bounds, and once we got out of our rhythm, it was hard to get our momentum back."

One of his go-to setting targets was senior Sam Eisbrenner, who also came up big both offensively and defensively for the Flames.

"Sam had the best game overall," Rigg said. "He had a really high hitting percentage yesterday and today and he had two blocks against Illinois State's outside hitters."

Though they didn't make it back to the silver bracket final, where they were eliminated by Michigan last year, the Flames did get some quality tests in the two-day event, facing the No. 14- (Ohio State), No. 17 (Illinois), No. 18 (Air Force), and No. 22-ranked teams in the latest NCVF Division I poll.

The Flames have nearly a month to get set for their next tournament, the Eastern Collegiate Volleyball Association (ECVA) South Division I Championships, March 26 at Virginia Tech. That will be the first of three consecutive weekends of tournament play, followed by the East Coast Championships, April 2 at Penn State, and the NCVF National Championships, April 7-9 in Louisville, Ky., with the stakes rising each time.

Rigg likes the team he has to work with now, after a turbulent first month of the spring season that has left the Flames with a 2-8 record and out of the Top-25.

"It has changed so much with injuries, but we've finally got rotation that we want," he said. "Everyone's getting healthy and finding how to play together. Right now, we don't have much time (to prepare for the postseason). We've found the right combinations we want, we just have to get more reps. We're going to take all the time we can to practice."