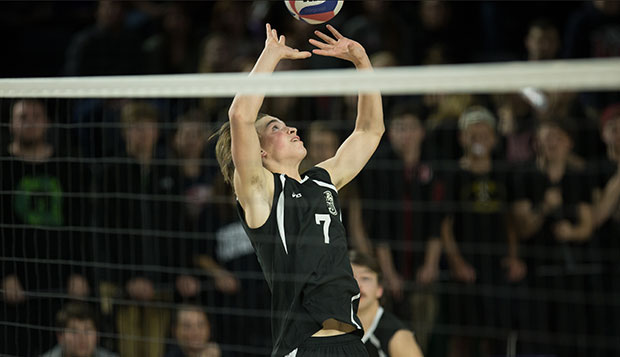 Freshman setter Kaden Knepper moved back into the starting lineup for Saturday's tournament play in the Hoosier-Illini Classic.

On Saturday's opening day of the Hoosier-Illini Classic, hosted by the University of Indiana, Liberty University's men's volleyball team advanced into the eight-team silver bracket of Sunday's finals.

Competing in a tournament field with 10 teams ranked in the National Collegiate Volleyball Federation (NCVF) Top-25, the Flames won their first challenge match, before dropping their second in a three-game heartbreaker and losing their first two rounds of pool play in tightly contested battles in the 10-court Wildermuth Intramural Center in Bloomington, Ind.

"They all were close matches," Flames Head Coach Bryan Rigg said. "We were leading in all of them. The deciding factor was they were more consistent and they weathered the storm. We're still working on our chemistry and working through our rotation to see who's healthy so we had a lot of guys subbing in and out who are dealing with injuries."

Sophomore Alex Lower returned from a concussion only to come down with strep throat so freshman Kaden Knepper filled in for him at setter. Freshman outside hitter Josh Talamoa, who sprained his ankle in the fall, is now playing through heel and arch injuries in his foot and senior libero Josiah Williams has a strained rotator cuff that prevents him from raising his left arm high enough to pass the ball as effectively as he normally does.

Senior defensive specialist David Hong is rotating in for senior middle blocker Sam Eisbrenner on the back row and junior Si Hershberger has moved back to the middle hitter position.

The Flames will face No. 22-ranked Northern Illinois in Sunday's first match, starting at 8:30 a.m., before gold, silver, and bronze bracket play begins at 11:45 p.m.

"The three top-20 teams we played today are in a different category than Northern Illinois," Rigg said, noting a win would give Liberty a better seed entering silver bracket play. "We're at least on their level or maybe a step ahead of them. Those should definitely be more manageable games."

"The California schools don't come out to this tournament, usually only Midwest and East Coast teams," Rigg said. "When we go to nationals, we'll have to play all of the top teams. But there are 10 in the top 24 and others just outside the bubble here, so it's good for us. We're seeing all the Midwest teams with exception of Wisconsin-Oshkosh."

He predicts ninth-ranked Penn State and No. 2 Virginia Tech, the highest-seeded teams in the tournament, will meet in the gold bracket championship match while the Flames will have as good a shot as any of the eight teams to reach the silver bracket final.