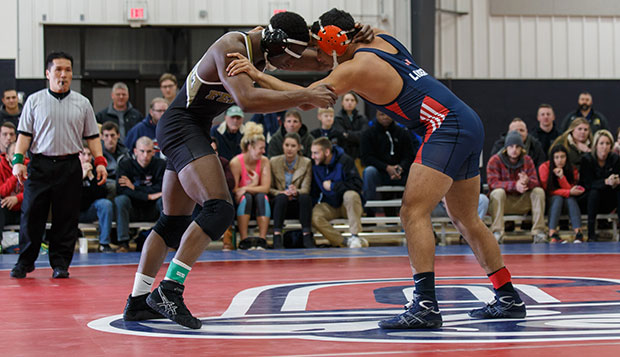 By placing 17 of its 22 wrestlers in the top five of Saturday's Mid-Atlantic Conference tournament at Middle Tennessee State, Liberty University's wrestling team matched the number of national qualifiers it earned last season, when it captured its first NCWA Grand National Championship.

Though the Flames did not suffer any injuries over the weekend, Liberty did not travel with two of its top wrestlers — sophomores Evan Canady, last year's NCWA runner-up at 235 pounds, and 141-pounder Logan Smith. Canady couldn't make the trip and Smith left the team.

As it turned out, the Flames won individual titles at those two weight classes, with freshman Branden Robinson filling in for Smith and claiming the 141-pound title and junior Charlie Hancock earning Canady's 235-pound crown.

"That was a bit ironic," Liberty head coach Jesse Castro said. "Branden Robinson just joined the team this semester. He's been triaing with us for about a month and this was his first college wrestling experience. He had the flu and a 102-degree temperature this morning and I wasn't sure he was going to be able to wrestle. I just tried to qualify him for nationals and he wound up winning it all."

In the smallest weight class with only six wrestlers, Robinson received a bye in the quarterfinals before scoring a 20-2 technical fall over Northern Kentucky's Ryan Campbell in the semifinals and winning by 18-4 major decision over VMI's Seamus O'Connell in the championship.

Hancock won his quarterfinal match by fall in 4 minutes, 29 seconds over James Madison University's Mark Sizemore before scoring a 9-3 decision over Steven Francisco of The Apprentice School and edging South Carolina's Andrew Carnes, 4-3, in the final.

Other individual champions for the Flames were junior 149-pounder Ike Podell, the only remaining All-American from last year's team, sophomore Michael Bryant at 165 pounds, and junior 174-pounder Josh Ferenczy.

Podell pinned William & Mary's Jonathan Hashisaki 1:46 into their quarterfinal match before scoring a 16-0 technical fall over JMU's Colton Simmons and a 5-4 decision over The Apprentice School's Ty Watkins.

Ferenczy pinned VMU's Joshua Stacey in 2:45 and won by 17-2 technical fall over Northern Ketuckey's Tytus Collins in his semfinal bout before winning by forfeit in the final over freshman teammate Taylor Westlake.

Senior heavyweight Josh Travers was the runner-up to MTSU's Austin Wells, who won the final bout by 3-1 sudden-victory decision in overtime.

Liberty freshman David Smith was the consolation champion at 184 pounds, taking his consolation semifinal match by 5-3 sudden-victory decision over Bridgewater's Josh Powers and the final by forfeit to teammate Eric Porch.