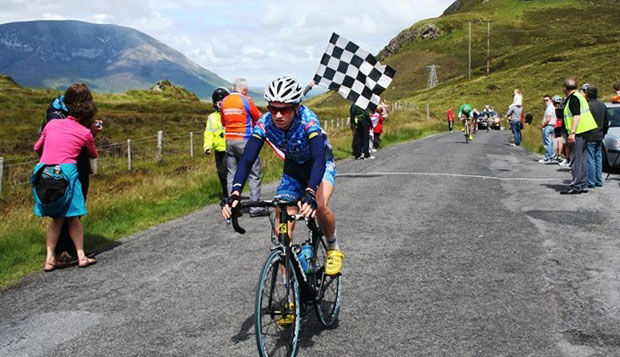 Jake King, 20, who turned professional at the age of 18, has raced internationally with Hincapie Sportswear and Hot Tubes.

Two cyclists who could challenge for individual titles at the May 13-15 USA Cycling Collegiate Road National Championships will help jumpstart Liberty University's men's and women's cycling teams in their inaugural season, which starts Saturday at the Tidewater Winter Classic hosted by the College of William & Mary in Williamsburg, Va.

King, 20, the younger brother of Ben King, who competed in the Tour de France in 2014, races for Cal-Giant, one of the top developmental teams in the country. Previously, he was a member of the Hincapie Sportswear Development Team and traveled to Europe to compete in Poland last summer. At Milligan, King placed eighth in the USA Cycling Division II road race nationals last May north of Asheville, N.C., also the site of this year's event.

"Jake comes from a long history of cycling," Liberty Head Coach Parker Spencer said. "His brother is one of the best American riders in the world right now. When you get a recruit like that, there are very few riders you would want more. He's definitely a huge asset to the team. All around, it's good for us because it will immediately give us some recognition, when we get out there and race."

King looked into Liberty's online program and competing for the Flames' fledgling program at the recommendation of Sonnery-Cottet, his former teammate at Milligan. Sonnery-Cottet, a former member of the women's French National Team who has raced in the French Cup and placed fifth at the cyclocross national championships last year, spent the fall semester in France.

"We've known Coach Spencer for a while and like his positive attitude as a coach," said King, an international business and business administration major. "He definitely knows what he's talking about, strategically, tactically, physically, and psychologically, which has probably been my biggest obstacle in my cycling career so far."

King and Sonnery-Cottet, who is pursuing an education degree, both juggle extremely challenging academic, athletic, and work schedules.

"I'm working, doing school, and racing now," King said. "I love to learn and am interested in the business world and also have a huge passion for cycling."

King won the men's pro/Cat I-II-III race and Sonnery-Cottet the women's Open race at a criterium hosted by NC State this past Saturday in Raleigh, N.C.

"Marie and Jake are pretty remarkable," Spencer said. "They're proving you can be in the outside world with a full-time job, and a full-time student, and compete at a very high level. It just takes dedication. That's what's so unique and great about what we have to offer here at Liberty."

King, who traveled with his dad, Mark, a Category II cyclist, when he raced through Lynchburg on the 2006 Tour of Virginia, said Liberty is the perfect setting for him to advance his career.

"It's an awesome location for cycling there in Lynchburg," King said, with the hilly terrain and proximity to the Blue Ridge Parkway. "The program has as much potential as any other collegiate cycling program, in the world, really. The online aspect is very valuable because a lot of times, cyclists have to travel to races with their trade team."

He plans to enter all but two of Liberty's regular-season events on a busy ACCC spring schedule, which would qualify him for collegiate nationals.

Though he will likely lead Liberty in most of its races, King brings a team-oriented focus to the Flames.

"There's no I in team," he said. "We'll all be in it together. I'm real excited to meet everybody and start racing and training together with them. I know for a fact it will be a blast. Coach Spencer is an experienced coach. He'll have everybody ready and get out there and win some races and we'll give the glory to God, no matter what."

Spencer is excited to see how Saturday's first competition goes for the Flames, who will enter nine men's cyclists in various categories, with Sonnery-Cottet the Lady Flames' sole representative in the women's A race.

"Our guys have worked really, really hard all winter and all fall for our first race of the year," he said. "Many of them have come a long way with their fitness and their riding level. They're excited to get out there and race and see their hard work pay off."

Ethan Krohn, a freshman from Minnesota, has emerged as a leader along with Bryan Ratliff, a graduate student from Roanoke, senior Christian Schick, and freshman Brandon Siller, who's also a standout on the triathlon team.

"It's going to be great having people like Brandon and Joey (Anderson) able to jump in when they're not competing in triathlon," Spencer said, noting junior Megan Merryman and senior Rachel Walters will do the same thing for the Lady Flames.