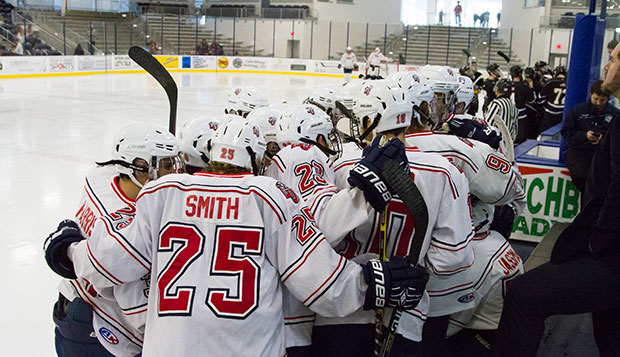 Despite being eliminated by Vanderbilt in the first round of last week's South Regional tournament in Orlando, Fla., Liberty University's ACHA Division III men's hockey team is headed to its first National Championships, March 8-12 in Grand Rapids, Mich., after Vanderbilt declined its invitation.

"(The ACHA) contacted us (Thursday) night and offered us the bid and we were able to accept," Flames Head Coach Rett McGibbon said. "We called an emergency team meeting at 11:30 p.m. in the (LaHaye Ice Center) conference room and when we told them the news, they looked like a bunch of guys who just got their favorite present at Christmas. When we confirmed it, they were all in a state of shock."

Liberty (12-11), which started its season with five consecutive losses and was 2-8 before winning 10 of its last 12 games, qualifying for the South Regional playoffs for the second time in three seasons, is elated to have a second life in the postseason.

"We haven't played any of these teams this year, so it will be interesting," McGibbon said. "We've seen some of the better teams in the South, and I know we can compete and have a good showing. At regionals, the team had the mindset that we were lucky to be there and we sold ourselves short. (At nationals), even though we got there through unconventional means, we deserve to be there. We want to go in with the mentality that we're a favorite, not just an underdog. Regardless of what happens, it is a good experience for us. But we're not going just to get experience. We're going to win."

McGibbon realizes the Flames will have to stay out of the penalty box after giving up eight power plays — including a five-minute major that resulted in Vanderbilt's last two goals — in the 4-0 regional loss.

"They had a couple five-on-three opportunities that they scored on," he said. "We only had one power-play opportunity. We need to do a better job of being disciplined in a game like that."

The Flames will have a few players back who missed the regional game due to injury (senior Markus Deas), sickness (freshman Zach Moore), and suspensions (Dalton Harris and Matthew Graham).

In their absence, the Flames resorted to playing their top defensive pairing of senior Parker McIntyre and freshman Nathan Glick for more than 30 minutes and their top offensive line of junior Kade McDaniel, senior Josh Klakring, and sophomore Jonathan Klakring for more than 25 minutes each.

Junior goalie Pat Cormack made close to 50 saves against Vanderbilt and is the probable starter for the opener against Oakland.

"We have really solid goaltending, a lot of heart, and a lot of talent coming up," McGibbon said. "All we need is our goalie to be really good and for us to catch fire and we can play with anybody."