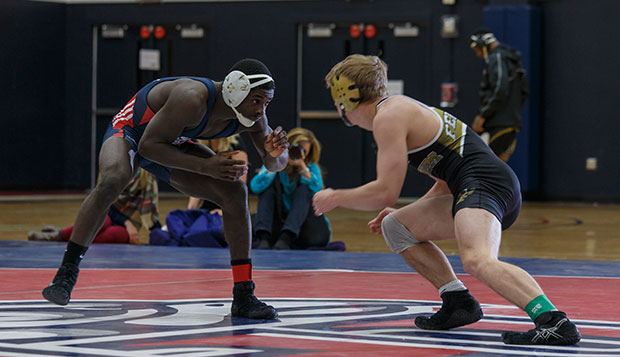 Liberty sophomore Logan Smith should have an excellent shot at qualifying for nationals at the 141-pound weight class.

In the 16-team tournament field, he expects the Apprentice School, which Liberty defeated in the third-place match at the NCWA National Duals, to be the Flames' toughest challenger for the team title along with host MTSU.

"James Madison is a team to look at, too," Castro said, noting it is an NCWA Division II program whereas the Flames compete at the Division I level. "(The Dukes) don't have the numbers, but the guys they have are pretty tough. They'll be entering guys who have already qualified for the (DII) national tournament."

Castro is bringing 24 wrestlers to compete in 11 weight classes in the one-day event. The seedings for each bracket will be determined Friday night before weigh-ins take place Saturday at 7 a.m. prior to the 9 a.m. opening matches.

Individually, the top five-place finishers in each weight class — along with a total of six wildcards — qualify for the March 10-12 NCWA Grand National Championships in Kissimmee, Fla.

"I'm planning on taking 19-20 wrestlers to nationals," Castro said, which would eclipse the team-record 17 qualifiers the Flames sent last season. "We had seven individual champions last year, which will be difficult to match. Optimistically, we may have a shot at five. If we do that, I'd be really pleased."

"We have to rely on Evan and Ike, those two are our mainstays," Castro said. "Hopefully, (freshman 141-pounder) Logan Smith and Josh Ferenczy, and even (senior heavyweight) Josh Travers will come up big, too."

Freshman 125-pounder Dell Ngonga, competing in the weight class with the smallest number of participants, could challenge for the title, too, if he can get past the Builders' Ty Boyd, who beat him twice this season, including 6-5 in the NCWA National Duals consolation final.

"Dell has been inching up on him and had him beat there, but had a mental lapse and lost in the final seconds," Castro.

Sophomore Michael Bryant also has the potential to stage some upsets to reach the 165-pound final.

"He's kind of an underdog, but he can wrestle and if he can take it up a notch he can certainly surprise some people," Castro said.