Boyles excited to skate on home ice for Eastern Sectionals 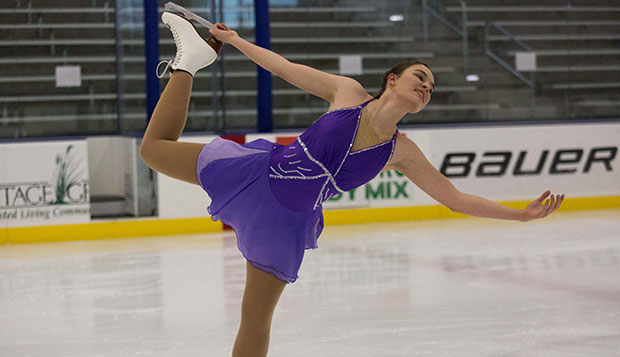 Lady Flames senior Emily Boyles will compete in one of two groups of the Ladies Preliminary Freeskate on Saturday afternoon in the LaHaye Ice Center.

As Liberty University's figure skating team prepares to host its sixth United States Figure Skating Eastern Sectional Intercollegiate competition in the past seven years, and showcase the renovated LaHaye Ice Center this Friday through Sunday, senior Preliminary skater Emily Boyles will be one of three Lady Flames looking to successfully defend their titles from the first of three sectional events held Nov. 22 at Cornell University.

The three-day competition starts Friday with preliminary events from 6-11 p.m. before picking back up Saturday from 7 a.m. to 9:25 p.m. and Sunday from 8 a.m. to 4 p.m. Admission is free.

"I love competitions," said Boyles, a psychology major minoring in business who maintains a 4.0 GPA while working on her honors thesis and working part-time at the American Association of Christian Counselors in Forest, Va. "It's probably one of my favorite things."

Figure skating has helped Boyles — who placed first at Cornell along with fellow senior Preliminary skater Maria DeFosse and freshman Sibylle Harter (Pre-Juvenile) — maintain her balance not only on the ice, but in all aspects of her busy life.

"Honestly, staying healthy and active is a huge part of doing well academically, as long as you can find that balance between school and keeping active without making one or the other too much of a priority," Boyles said. "We're here as students, but while we're here, we also want to take care of ourselves physically and sports is a great way to do that, and have a lot of fun while you're doing it."

She started ice skating at the age of 5, taking weekly lessons in a homeschool "Learn to Skate" program run by her mother. But she didn't own her first pair of skates until she turned 16 and didn't compete in the sport until she arrived at Liberty.

"Having that opportunity now is really incredible and has been absolutely fantastic," Boyles said. "I love getting out there, I love being the only one on the ice, getting to hear my music, and just perform as best as I can. If I do well, great. If not, you know what? My goal is to have fun."

"She worked super hard to get where she is, keeps a positive attitude, and has improved by leaps and bounds since she started," Liberty Head Coach Jamie Swyers said.

"I can definitely see a huge improvement in my skating ability from where I started to where I am now," Boyles added. "We have some amazing coaches here and just watching the skating program develop over the four years that I've been here, there have been some amazing changes that have taken place."

She said figure skating is an exhilarating sport to participate in and wants to introduce more people to it this weekend.

"When I came here originally, we had a very small figure skating team and it has just grown tremendously, both in size and in the commitment that the skaters have," Boyles said. "It's been fun to watch and I'm really proud to have been able to be a part of it, however small."

She loves the relationships she has formed with her teammates, strengthened especially on road trips, like the one they'll take to SUNY-Geneseo for the third and final Eastern Sectional on March 12-13.

"We're always there for each other at competitions and when we have our early-morning practices, there's always people offering rides," Boyles said. "We do team activities and grow together as friends and teammates, both on and off the ice."

During PraiseFest: Christmas Edition, held Dec. 13 at the LaHaye Ice Center, she played the role of Elsa and junior teammate Rebekah Hicks was Anna as they skated to "Do You Want To Build A Snowman" from the movie "Frozen."

"It was so much fun," Boyles said. "It was just a chance that all of us could come together and put together programs without the pressure of competition. I really had a blast skating and I hope people enjoyed watching it."

For this weekend's Preliminary free skate sessions, due to start Saturday at 4:23 p.m., she will perform to music composed by her brother, Michael, who lives with their family in Winchester, Va.

"He's 17 and he's brilliant and he writes music so I asked him if, for my senior year, he would compose a piece of music that I could skate to," said Boyles, who will be wearing a purple dress made by her aunt, Kristina Hoffmann. "It's like having my family there even if they're not physically present."