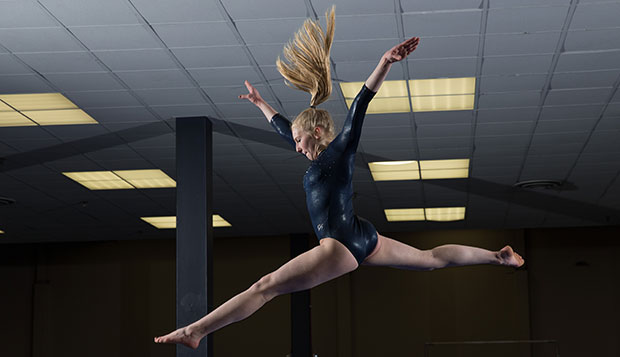 Liberty freshman Julie Bouton won the vault, placed second in the floor exercise, and third on the uneven bars to earn All-Around honors at Saturday's meet at JMU in Harrisonburg, Va.

On the men's side, Liberty sophomore Cameron Streeter placed in the top three in all six events and finished runner-up to William & Mary's Rick Brown in the All-Around to pace the Flames past the Dukes and Cavaliers as well as an NAIGC alumni team.

"The kids were thrilled," first-year Head Coach Tim Kappel said, noting the Lady Flames only brought five female and three male gymnasts to the meet while the Lady Dukes had 25 on three teams. "One big change we made this year was that we're only going to send top quality athletes to meets and our athletes have been responding. There were quite a few people there and we were all pretty shocked that we beat them. JMU was more shocked than anyone."

Individually, Bouton and Grim placed first and second on the vault, followed by Navy's Michaela Connally. Bouton was also second in the floor exercise, behind UVa's Joanna Labban and third on the uneven bars while Grim was runner-up on the balance beam behind only JMU's Courtney DeDea.

Streeter won the parallel bars and placed second to Brown on the floor exercise and high bar, runner-up to West Virginia's Joseph Gruber on the vault and William & Mary's Ryan Antal on the pommel horse, and third on the rings behind Antal and Brown.
"The guys had a huge improvement from the last time we competed (Jan. 30 at Ohio State, where the men and women both placed second)," Kappel said. "They had a lot fewer mistakes."

Complete results will be posted on the NAIGC website once a few scoring errors are accounted for.

Kappel, who had planned to take his teams to UNC Wilmington on March 19, is trying to find a replacement meet to travel to at the start rather than end of Liberty's spring break.

"We have options everywhere from Florida to Maryland," he said.

He may reconsider how many athletes the teams carry to Sacramento, Calif., site of the April 14-16 NAIGC National Championships.

"After doing well against the defending national champions, team-wise, we're trying to evaluate and see where we are, but with nationals being in Sacramento, we want to make sure if we were to do it, it's going to be worth our while," Kappel said.

Liberty most likely will not be able to host a competition this spring but will use its facility in The Plaza to put on the Commonwealth Games gymnastics events in November, which will include college club teams as well as Junior Olympic competitors.