Liberty enters ACHA DI Nationals as No. 1 seed (with video) 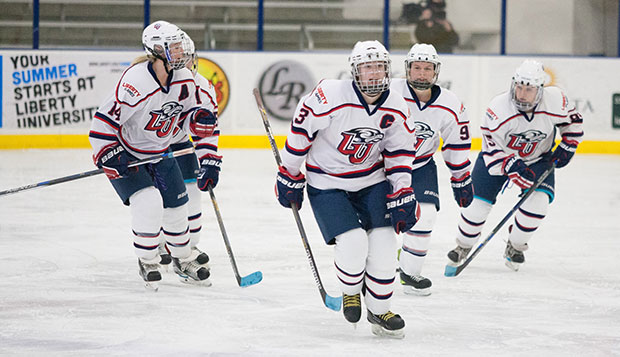 Liberty hopes to have its top line at full strength for the March 9-13 ACHA DI National Championships in Kalamazoo, Mich., where it will try to repeat its title.

For the fourth consecutive ranking period, Liberty University's ACHA Division I women's hockey team is the No. 1 team in the nation and will take the top seed into the eight-team National Championships, to be played March 9-13 in Kalamazoo, Mich., for the second time in four years.

"(The No. 1 seed) leaves us in a good position, but we're going to have to take care of business," Liberty Head Coach Paul Bloomfield said. "We could play five games of hockey in five days and we've got a thin bench, so we've got to pray that we stay healthy and make sure we're eating right and resting and allowing ourselves the opportunity to play our best."

The defending national champion Lady Flames (20-3-1) won last year's tournament as the No. 2 seed after finishing runner-up as the No. 1 seed in 2013 and placing third as the No. 7 seed in 2014. They are making their eighth national tournament appearance in the 10-year history of the program.

Liberty will be placed in the same pool as No. 8 Michigan, No. 6 Lindenwood-Belleville, and No. 3 Grand Valley State, which it will face at 7:45 p.m. on Wednesday, March 9, Thursday, March 10, and Friday, March 11, respectively. Michigan and Lindenwood are the only two teams in the eight-team field that the Lady Flames didn't face this season.

"We feel we should be able to handle them, but we haven't seen them and they haven't seen us," Bloomfield said. "The top four teams are definitely stronger than the bottom four. There are no guarantees and there can always be a surprise, but the top teams should dominate."

Pool B will include No. 2 Miami of Ohio, the 2014 national champion and runner-up to Liberty last season, No. 4 Adrian, No. 5 Massachusetts, and No. 7 Rhode Island.

All games will be played in the Wings Event Center, which features two ice pads.