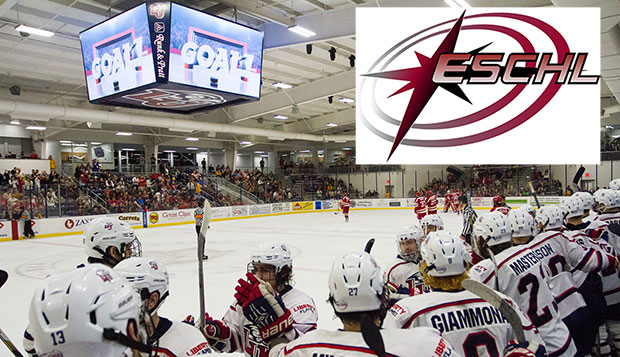 Liberty celebrates a goal in a game against ESCHL member Stony Brook, Nov. 6, 2015 at the LaHaye Ice Center.

Liberty University's ACHA Division I men's hockey team, which has been independent since moving up from the Division II level in 2006, will join the Eastern States Collegiate Hockey League (ESCHL) next fall.

"I'm happy to announce that Liberty University will be joining our league for the 2016-17 season," ESCHL Commissioner Dom Bellizzie said. "We believe it will help us to maintain a very competitive schedule and continue our reputation as one of the strongest leagues in the East."

"This is big for us," Flames Head Coach Kirk Handy added. "We've been independent for nine years now. We had looked to see if we could get into the Eastern States League a few years ago, and now the timing is right for us."

The ESCHL was created in 2007 and features six teams in the Northeast and Mid-Atlantic region of the United States. The Flames will replace Lebanon Valley, which joined the league in 2013 and will move back up to the NCAA Division III level next season. Liberty will join defending league champion Stony Brook and Delaware, two teams it has faced four times each in recent seasons, as well as Rhode Island, Rutgers, and West Chester, which will host the ACHA Division I National Championships next March.

"Geographically, it makes sense," Handy said. "It allows us to keep our travel on the East Coast. It'll be different, but there's some advantages in doing that. We still get opportunities to play other rivals that are not in the conference who we've developed great relationships with, which was very attractive to us."

Handy is also excited about continuing and establishing rivalries with ESCHL opponents.

Beginning next season, the Flames will play 18 non-conference games in addition to their 20-game league schedule, including 23 games in the recently renovated LaHaye Ice Center. (Read more about that facility in the Liberty Journal). They will play four contests —  two at home and two away — against each of the five league opponents, determining a regular-season champion and automatic bid to the ACHA DI national tournament, before competing in the ESCHL playoffs in February.

"It's a great opportunity for us to play for a conference championship," Handy said. "One of the advantages of playing (in the league playoffs) is you get a nationals-type setting before nationals to get in that mindset. It's a do-or-die. You win, you stay; you lose, you go home. So we're looking forward to that."