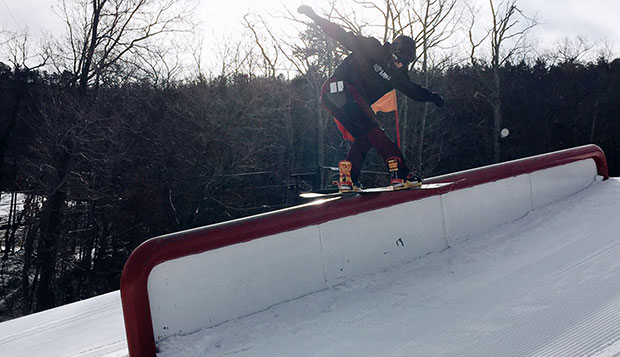 Liberty University's men's and women's ski & snowboard teams adjusted to much larger features and a deeper field of competitors than they were accustomed to and still posted strong showings at this past weekend's USCSA East Coast Regional Championships, hosted by Seven Springs (Pa.) Mountain Resort.

In the men's snowboard competition, Liberty placed three in the top 12 — junior captain Brendan McHugh (third) and sophomores Garrett Long (10th) and Austin Santos (12th) — and eight in the top 25 to finish first in the team standings.

On the women's side, freshman Rebecca Lawrence was the runner-up in skiing and senior Brandy Fronte placed 10th out of 30 snowboarders despite falling on both of her runs.

"It was really a good wake-up call to prepare ourselves for nationals," Flames Head Coach Ryan Leeds said. "When we see features a lot bigger than we're used to seeing, we want to encourage our athletes to overcome that fear, knowing they've put in a lot of work and they're more than capable of attacking each feature at nationals with aggressiveness and confidence."

All 14 participants will travel to the USCSA National Championships, March 6-12 at Lake Placid, N.Y.

They will compete in the men's and women's ski and snowboard Rail Jam events on March 7 before entering the Slopestyle competition on March 8 and the Boardercross and Skier-cross events on March 9 and March 10, respectively.

"We don't excel at Slopestyle as much as we do on Rail Jam, but we are a freestyle team so that's kind of in our wheelhouse," Leeds said, noting there will be pressure to make the most of each run at nationals. "We've never been put in situation where we only get two runs and need to perform perfectly to advance to the final round at the national event, where we'll also be adding larger features than they have ever competed on before."

While the women don't have enough competitors to score as a team, Leeds is confident the men's snowboarders can improve on their fourth-place finish in the Rail Jam from last year's USCSA Nationals and the skiers can match them.

"We've worked on our cardiovascular fitness, so we have advantage in hiking events like the Rail Jam," Leeds said. "Knowing we're in better shape than our competitors, when they're tired and not able to perform as well, we're just getting started."