Flames plagued by penalties in 15-7 loss to Yellow Jackets 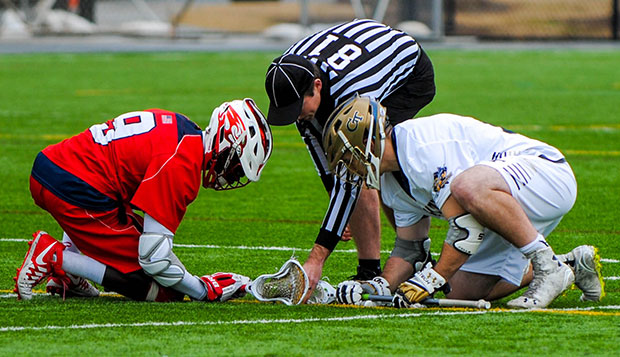 Liberty senior Charles Fianko won 13 of 22 faceoffs against Georgia Tech, but it wasn't enough to spark the Flames' attack until the fourth quarter.

A decidedly defensive first half against Georgia Tech, one of the strongest defensive teams in the country, turned into more of a shootout in the second, when the Yellow Jackets stung repeatedly to pull away for a 15-7 triumph over Liberty University's men's lacrosse team, Sunday afternoon in Atlanta.

"It was a tale of two halves," Flames Head Coach Kyle McQuillan said. "The first half was pretty tightly contested, defensively, when our goaltending was outstanding. We were in excellent position at halftime, trailing 2-1. Unfortunately, Georgia Tech went on a bit of a run and were never able to stop the bleeding. They're a solid team all-around and are going to be a tough team to knock out of the SELC tournament (April 22-24 near Atlanta)."

"This was a very good test for us," McQuillan said. "Their one-on-one defense was stellar. We have some very good individual offensive players. They're our go-to scorers, but they just don't make mistakes. When you play teams like Georgia Tech and Virginia Tech, teams that compete on a national level, they're able to create offense as a team rather than have individuals go out and score."

Freshman goalie Matt Nichols kept the Flames in the game in the first half.

"He really had a phenomenal game," McQuillan said. " Particularly in the first half, he was lights out. He was the reason we were in that game. He made some great saves that kept the game very close."

However, a total of 10 penalties, for everything from pushes from behind to crosschecks, slashes, and misconduct, eventually took their toll as the Yellow Jackets started capitalizing on their man advantages.

"We were able to minimize our mistakes in the first quarter, when we adapted and fended off quite a few man-down situations," McQuillan said. "In the second half, the mistakes continued to mount and we put ourselves at a disadvantage by making mental mistakes and bad decisions which resulted in our guys spending time in the penalty box and hey started rallying because of it. That's a tough position to put your goalie in. We didn't do him any favors."

Senior faceoff specialist Charles Fianko won 13 of 22 faceoffs to give the Flames more than their share of possessions, but they could have won more had they won their share of ground-ball battles that followed.

"Georgia Tech's got some great faceoff players and Chuck did exactly what we needed, especially late in the game, which was what sort of rallied us," McQuillan said. "Unfortunately, it was too little, too late. We were behind the eight ball."

McQuillan doesn't believe the back-to-back losses to open the season, after Saturday's 12-11 loss to Boston College, will diminish the Flames season.

"Two games and two losses hurt, but they do nothing to prevent us from doing what we've set out to do," he said. "We have to learn from games like today. We definitely battled back and there was some fight there. We definitely have a lot of work to do as a coaching staff and as players. We don't want to lower expectations but we have to shore up some things."

The Flames will open their home schedule on Saturday at 2 p.m. against George Washington before hosting West Virginia on March 5. Both are SELC Northwest region opponents, with the top two teams in the final regional standings advancing to the SELC Tournament.

"Both (Boston College and Georgia Tech are) ranked higher than us in the national rankings and losing to them won't do anything to keep us out," McQuillan said. "These are the games that will get us into the playoffs, though having Virginia Tech in our region makes the path a little narrower."

Liberty will host the fourth-ranked Hokies, who advanced to the MCLA Final Four last spring, in their regular-season finale on April 15.

"It's tough at this point to be wildly optimistic, but we still have a lot to play for this season," McQuillan said. "We need to continue working and pushing through."