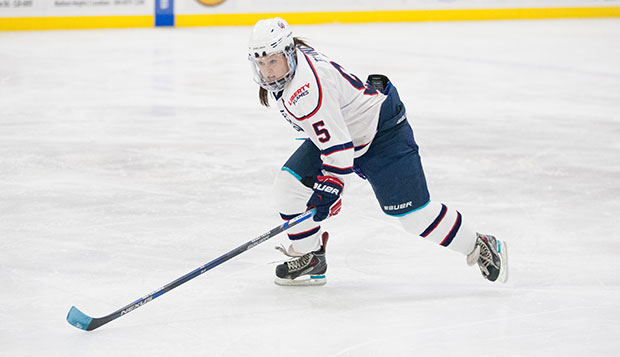 Liberty sophomore forward CJ Tipping assisted one of the Lady Flames' five goals on Saturday at the LaHaye Ice Center.

A regular-season ending split against the Carolina Aces, who won the USA Hockey Women's Senior National Championship as the Tri-City (N.C.) Selects in 2014, gave Liberty University's ACHA Division I women's hockey team a little extra incentive to get ready to defend its collegiate crown, March 9-13 in Kalamazoo, Mich.

The Lady Flames (20-3-1), who finished undefeated against ACHA competition, aside from one forfeit, but 1-2-1 against travel teams from Washington, D.C., and North Carolina, won Saturday night's first game 5-1 before losing Sunday morning's rematch, which started less than 10 hours later, 5-3.

"It was a decent game for having some of our girls out," said Liberty Head Coach Paul Bloomfield, who opted not to play senior forward Catharine Burrell and senior defensemen Brittany Hymers and Madison Fischer, who are nursing minor injuries. "We didn't play (freshman defenseman) Kjristin Hoberg in third period and we played (senior forward and head captain Carrie) Jickling very sparingly. We've still got two weeks to recover. We'll practice and get everybody back into their game for nationals."

In Saturday's opener, Liberty scored three of its five goals in the closing minute of the first, second, and third periods. Freshman forward Lauren McDonald netted her second hat trick in four games, slipping the puck through traffic from the right side to snap a scoreless tie with 28 seconds left in the first period.

The Aces tied the contest early in the second period before Jickling netted the game-winner with 48 seconds left off assists from freshman forward Lauren Pillisch and junior forward Courtney Gilmour.

Then, with 2:46 remaining in the third, Jickling set up sophomore forward C.J. Tipping for a shot from beyond the top of the left circle tipped in by Hoberg, stationed near the net. Carolina pulled its goalie and McDonald completed her hat trick with an unassisted empty-netter, fired from Liberty's end.

In Sunday morning's rematch, Burrell, Hymers, and Fischer sat out while Jickling and Hoberg played even fewer minutes and Carolina capitalized, outshooting the Lady Flames, 49-30. Sophomore goalie Rosie Kelly made 44 saves in the losing effort.

The Aces netted the first goal with 8:10 left in the first period before Liberty graduate forward Nikki McCombe tied it at the 3:18 mark, assisted by sophomore forward Chelsey Greenwood.

Jickling scored the go-ahead goal with 4:00 left in the second period, assisted by Gilmour, before Carolina tied it at 2-2 just 1:22 later. Pillisch put the Lady Flames back on top, 3-2, just under three minutes into the third period, finishing a feed from Hoberg, before the Aces scored three unanswered goals, including an empty-netter, in the final 10:13.

Liberty is still expected to remain at the No. 1 spot in the final ACHA DI regular-season rankings, which will be released on Wednesday. That poll will determine the eight teams that qualify for the national tournament.